Twitter has achieved a central role in the Italian media ecosystem, especially in regard to the political dimension. But what are the variables that impact its adoption? And which are the communicative styles adopted? The 2014 European elections provide us with answers to the aforementioned questions. This article analyzes the timeline of the Italian candidates throughout four weeks of electoral campaign. The empirical data indicates that a more generalized adoption of Twitter was accompanied by the disappearance of the influence of the traditional political and party variables. The data places Italy in line with the figures for other countries, if not slightly ahead. Of the 825 candidates identified, 517 were found to have a Twitter account, and a total of 111,509 tweets were produced. The communication is largely one-directional (48.9% of original tweets) with sporadic shifts to the conversational style (13.4% of @replies). This obviously gainsays the rhetoric that social media have restored a direct relationship between politicians and citizens. A statistically representative sample of 3816 tweets was extracted from the universe of tweets produced by the candidates. A content analysis was used as the instrument for the investigation. The processing of data previously collected enabled us to construct a typology containing three different Twitter styles ("Personal Marketing, Reintermediation, Impression Management"), which range from a more «traditional» type of communication to one that is decidedly more «innovative». 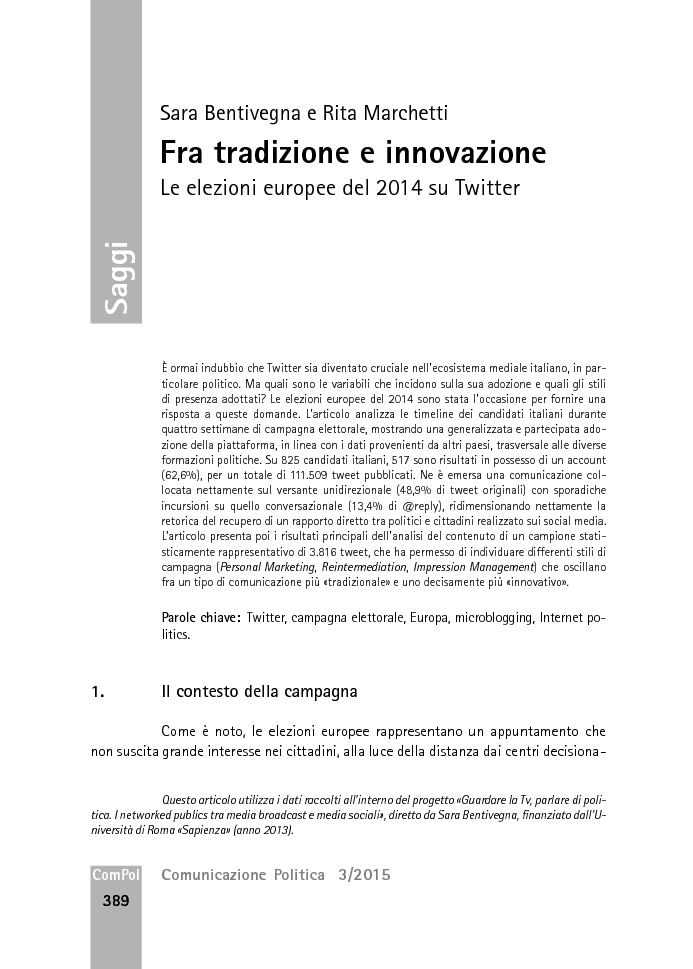