The present essay, analyzing Giorgio Agamben’s philosophical contribution regarding the pandemic and its legal and political consequences, proposes a close comparison between the author of Homo sacer and Georges Bataille, presented here as Agamben’s (mostly occult) master alongside the more overtly stated Walter Benjamin and Martin Heidegger. It will be argued that Agamben’s reading of the pandemic fits into his broader philosophical discourse on power, understood as a trans-historical continuum in which power and violence stand in a topological inside-out relationship from archaic Roman law to Auschwitz and the recent administration of the pandemic emergency. According to Agamben, this nexus of power and violence can only be defused through introflexion, a denial of activity. Agamben’s reflection is thus traced back to an aristocratic (and reactionary) challenge to the beautiful death that echoes Bataille’s joy before death. It is a response that takes the form of a paradoxical ‘affirmative tanatopolitics’ and that, in its genealogical obsession with the arché, forgets the role of rights as instruments for fighting oppression and shaping the violence that nonetheless always re-emerges, like a remnant and a discard, and peeps out from behind the baroque drape that covers the death façade of sovereignty 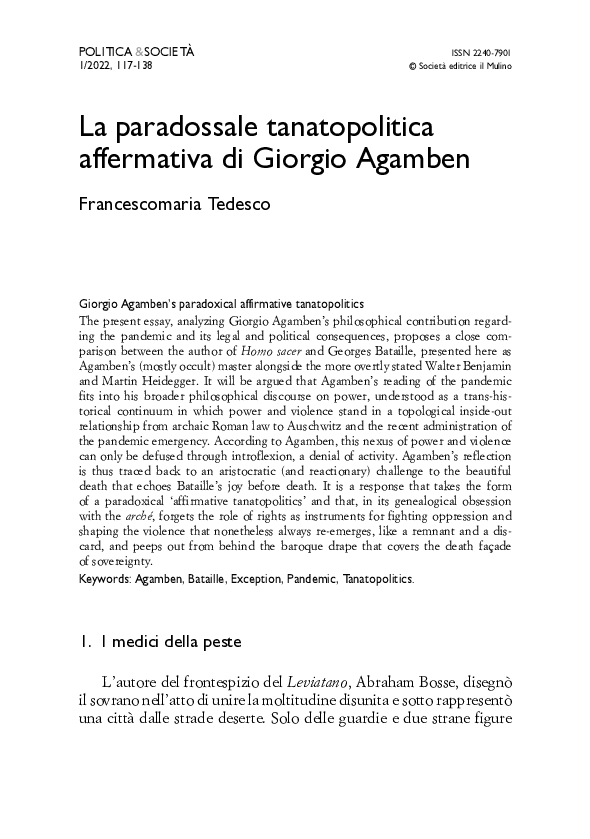