In this article, the author proposes a re-examination of the Hegel-Marx connection, with particular regard to the presence in Marx's critique of political economy of categories and structures drawn from Hegel's logic. Through a discussion of the so called "homology thesis" (the idea that the functioning of capital represents a historical embodiment of Hegel's idealistic logic, that is, of the domination of "pure form" over the concrete), the Author maintains that the relation between "Capital" and Hegelian logic should be reframed as follows. Firstly, he argues that Marx's critique shares the Hegelian aim of unravelling the quasi-natural activity of logical categories. Secondly, he shows that Hegel's "system of needs" displays a peculiar relation between universality and particularity that corresponds to political economy as an eminent example of "intellectual" science, while Marx's notion of capital allows the construction of the critique as a "philosophical science" in the Hegelian sense. Thirdly, he maintains that interest-bearing capital is to be conceived of not only as the highest point of reification, but also as the real starting point of the monetary circuit, and that in this latter function it proves to be even more "Hegelian" than in the former. As a result of this renewed interpretation, a more adequate picture of the complex ontological and methodological relation between Hegel and Marx becomes possible. 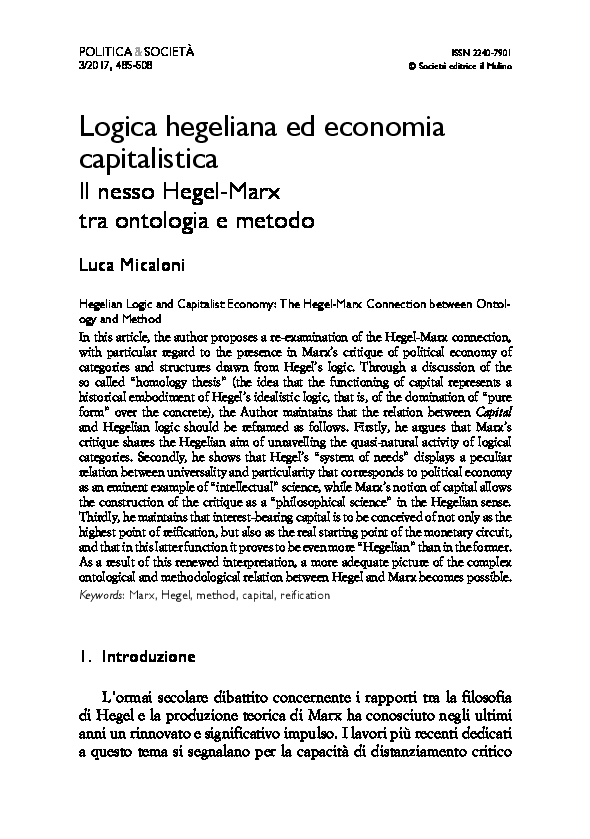