In May 2016, the Italian Parliament issued a poor and ultimately discriminatory law on civil partnerships that does not recognize family status to same sex couples, and yet constitutes an important step towards full citizenship for sexual minorities. Television initially reacted with a proliferation of moving and edifying programs celebrating lesbian and gay couples' love. But less than one year on, a big media scandal occurred involving 'gay saunas' - private clubs where only men are admitted, mostly not seeking love, but casual sexual intercourses. Why does anonymous sex between males keep on disturbing the same public that is touched by stories of televised gay couples and their love dream turned into second class marriage? To answer this question, the theoretical tools of both critique and postcritique seem not to be adequate. In particular, the progressive politicization of sexuality, that Michel Foucault shares with many critical heirs to his thought (such as Lisa Duggan, Jasbir Puar), also affects a postcritical author like Davina Cooper. The article offers an alternative perspective by taking a situated and participating point of view and employing the psychoanalytic understanding of sex developed by so-called antisocial queer theories (Leo Bersani, Lee Edelman). In so doing, it gives the example of a kind of intellectual who is different from both the critical and the postcritical intellectual described by Bruno Latour - showing what the two actually have in common. 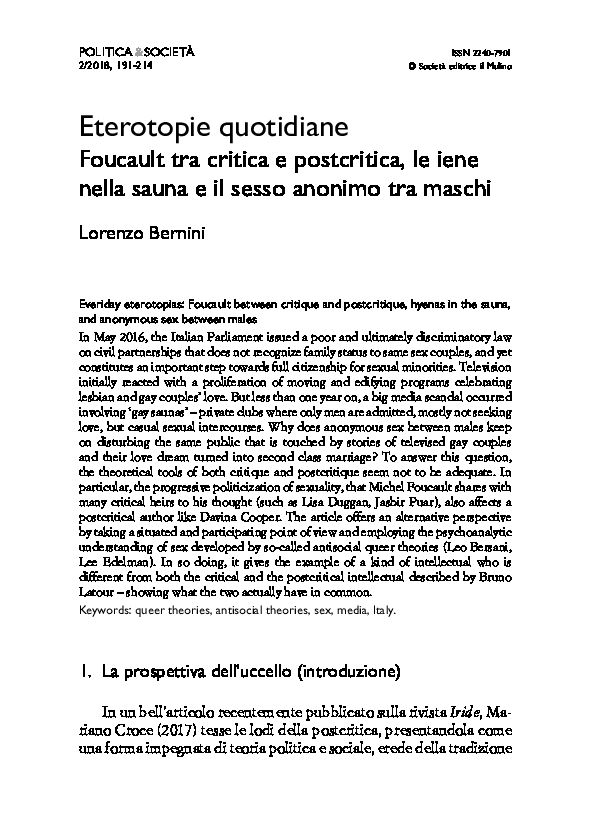