"It is only through partiality that one can understand the entirety". This is the deep, philosophical, political meaning of antagonism, according to Mario Tronti. A radical antagonism, questioning the very same foundations of the prevailing ideology, in a time where the myths of progress, spontaneity and innovation actually aim at concealing an authentic "Restoration". Political realism versus the ideology of progress, then; organization versus spontaneity; revolutionary conservatism versus an innovation which is actually a Restoration. On the basis of the perspective he takes, Tronti sees the decline of the West, in line with Spengerl's prophecy: history seems to be moving its focus to the east, as if it was about to close one of its circles. The central issue is the twentieth century: its end, which dates back to the years 1989-91, opens a new era; the major changes represented by the end of the Soviet exception and the "progressive era" - with the coming of a "post-industrial" capitalism - are reflected in the so-called "democracy realized", which is nothing less than a "growing and all absorbing embourgeoisement". This is an overview of the history of the last fifty years, in the general framework of the political forms and the patterns of thinking throughout human history, without neglecting the antagonistic partiality adopted with "operaismo" (workerism) and partially redefined by the concept of the "autonomy of the political". A partiality which, like in the "Katechon", holds back what the bourgeois narrative defined as "progress"; an antagonism which is able to resist spontaneity, to lead and guide, and therefore doesn't lose its fundamentally political value. 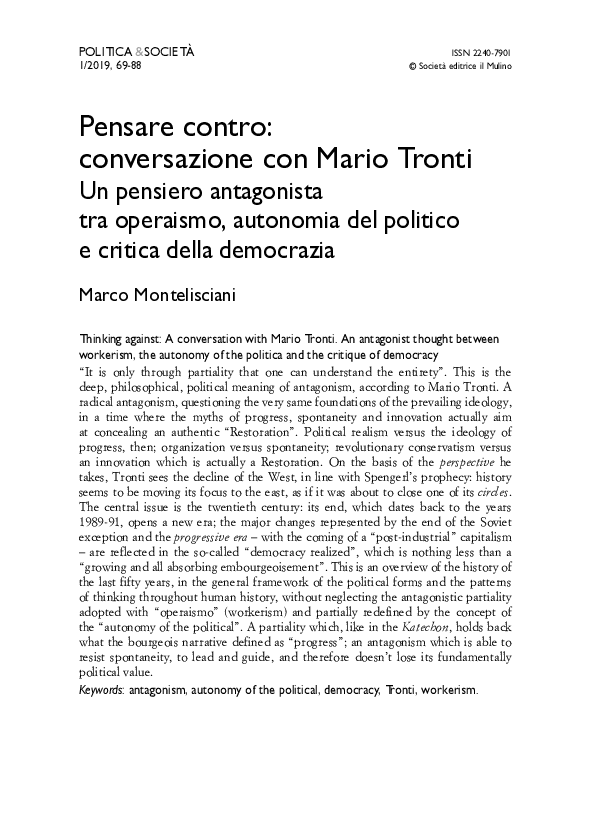