This article aims to reflect on one of the central themes of Kantian political philosophy: publicity, considered the center of the accordance of politics with morals and the exercise of a public control of power implemented by the citizens. Starting from the Appendix of For perpetual peace, but referring also to other Kantian works, different meanings of the term “publicityµ are showed. For this purpose, the article focuses on a double level of analysis. First of all, the juridical one, that concerns the two transcendental formulas of Public Right, thanks to which Kant defines the accordance of politics with morals. They are also an instrument to define if a maxim, that determines political actions, is rightful or not on the base of its disposition to be publicized. The second level regards, instead, publicity meant as an “enlightenment methodµ, linked to the public use of reason (different from private one, as Kant writes in Answering the question: what is Enlightenment?). This use, free and autonomous, must be accorded to everyone and it is directed to a Publicum that potentially coincides with the whole world. The republican form of government is the institutional context in which the two levels are welded together and where public control of power is structurally guaranteed. In the background there are two elements: the distinction between law and ethics from the Kantian political point of view and the role played by individual dispositions in the exercise of this public control. 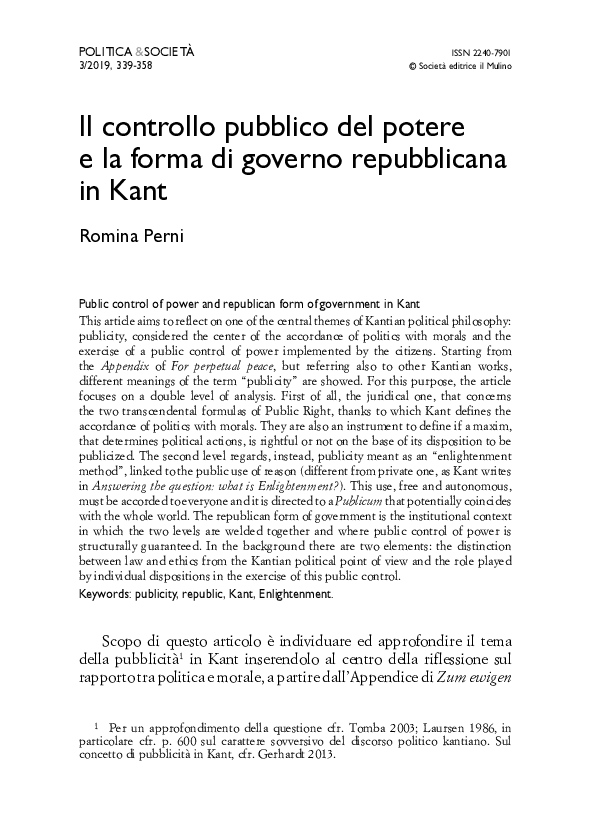