Object-oriented ontologies (OOOs) pose a major theoretical problem: such theories posit the existence of things as if the notion of “thingµ were somewhat obvious and self-evident. In fact, such a realism does seem quite naïve. The problem with the “thingµ is that nothing is less apparent than the thing as thing. In this paper, I discuss the problem of the thing through a commentary on the first section of Hegel’s first volume of the Science of Logic – the one dedicated to the theme of “Beginningµ – and the last part of the third book, dedicated to the “Absolute ideaµ. In fact, it is difficult to establish what a “thingµ in any immediate sense is: such a thing is the most abstract entity that it could be. Therefore, that of the thing cannot be the starting point of the process of knowledge and action – as the OOOs claim; on the contrary; the thing (Sache selbst) represents the arrival point of such activities. Things do not “existµ qua things before knowledge; they are paradoxically the “productµ of the linguistic and cognitive process on reality. In the last section of this paper, through a brief discussion of some relevant Bryant’s critiques of Hegel, it will be shown that such a position properly is not an anti-realistic perspective. 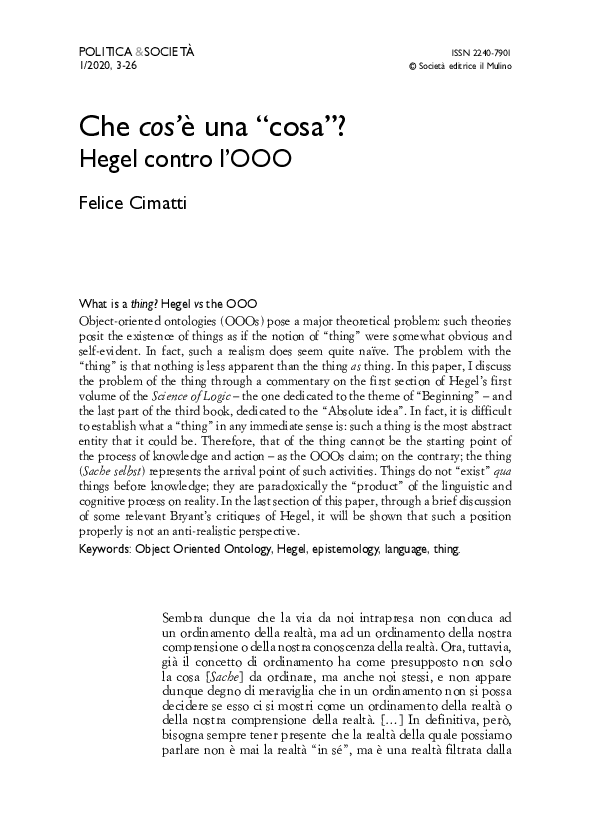