In recent years, the concept of subjects of civil relations has obtained a new essential dimension given the transformational processes of the modern world society. In turn, the right to freedom of association holds a valuable place in the system of human rights and freedoms. The activities of civil-society structures, an integral part of which are public associations, is one of the most important conditions for the implementation of effective socio-political and economic transformations and reforms. In this context, it was substantiated that the issue of obtaining the status of a subject of civil relations by a community organisation requires further development, especially based on comprehensive comparative studies of legal regulation and enforcement practice in the post-Soviet space. Common archaic norms of civil law of the Soviet Union, «inherited» by states, despite their successful longstanding approbation, require their qualitative renewal in the light of globalisation and the implementation of European standards and requirements. The relevance of the subject matter is also determined by the need of Ukrainian society in effective community organisations that act as a full participant in civil relations, and constitute a component of civil society and a catalyst for its growth and Europeanisation. Within the outlined subject area and purpose of the paper, the author: 1) analysed the specific features of legislative interpretation of the terms «public associations» and «community organisations» in Ukraine and CIS countries; 2) conducted a comparative legal analysis of the status of community organisations in Ukraine and CIS countries; identified problems and features of their activity as subjects of civil relations; 3) based on the study, outlined the unified properties of community organisations as subjects of civil relations for Ukraine and for the CIS countries; 4) considered the controversial stance concerning the increase of the influence of community organisations on the state authorities and the management of society at large; 5) provided reasoning that the purpose of the activity of modern civil-society organisations as subjects of civil relations should be the long-term planning of the mechanism of realisation of certain social priorities, the development and introduction of clear limits of their powers and initiation of amendments to the existing civil law in order to detail their special status in the above-mentioned legal relations. 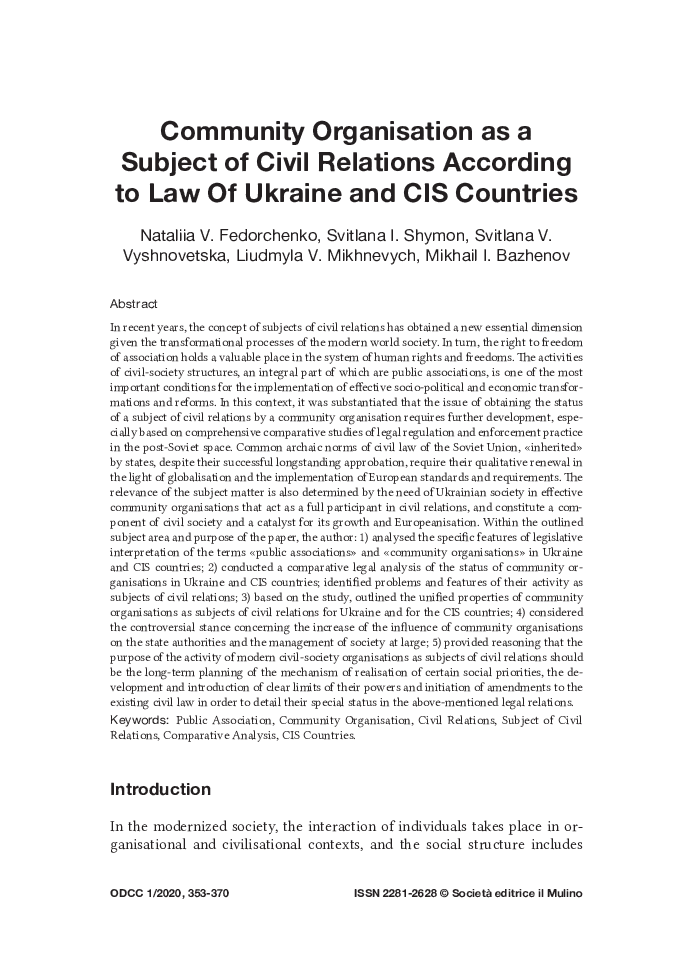