Gerard Toal is among the scholars who have most contributed to the birth and development of "critical geopolitics". His latest book, "Near Abroad" deserves attention not only for the importance in its own right of the issue upon which it focuses, namely the conflicts in the post-Soviet Caucasus and Black Sea region. But also for the opportunity it offers to evaluate the merits and shortcomings of critical geopolitics. The article affirms that "Near Abroad" constitutes, in many regards, critical geopolitics at its best. Firstly, Toal's notion of the post-Soviet space as a «post-colonial geopolitical field» helps to grasp the extreme complexity of the conflicts erupted in the Caucasus and Ukraine, and the peculiar geopolitical dynamics which have characterized the post-Soviet space since the end of the Cold War. Secondly, Toal's emphasis upon «geopolitical culture» and «affective geopolitics» rightly brings to the fore the important role that the emotional factors (especially cultural and psychological attachment to place and territory) plays in the geopolitical conducts of States and groups, along with the dispassionate considerations of power and security traditionally underscored by classical geopolitics. Finally, Toal's notion of «geopolitical condition» sheds light on the remarkable impact that technology tends to have on the subjective perception of geographical proximity and distance, and, as a consequence, on the geopolitical visions, aspirations and often illusions which move the players in the geopolitical arena. 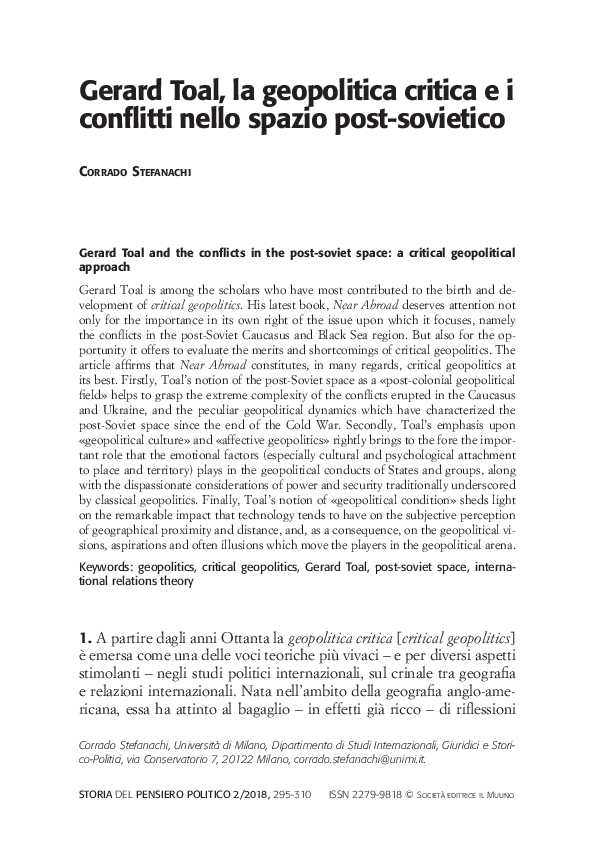