After the electoral defeat of Donald Trump in 2020, the «populist moment» in the West seems to have taken a break. It is now time to reflect upon the effects that this particular period has had – and will have – in the future of international politics and the possible decline of liberalism. This paper aims to start a conversation on this topic, beginning from the analysis of the legacy of Donald Trump in American foreign policy-making. In order to interpret the 45th President’s foreign policy approach, a general framework – related to the characteristics of his specific kind of populism – will be adopted. The thesis is that the traits of Trump’s populism are nativism, anti-globalism, and isolationism; those facets applied to American foreign policy influenced the perception of change of the international role of the United States, being no longer the hinge of the global liberal order. Above all, the focus of the theoretical investigation will be the connection between his foreign policy decisions and statements and his peculiar use of the so-called Twitter diplomacy. Based on this perspective, the paper underlines the functions that his «social routine» of digital political communication played in American foreign policy through the global spread of his political thinking. Indeed, former Secretary of State Rex Tillerson, declared that at the time he was in charge he used to print the President’s tweets early in the morning to schedule his daily agenda of foreign policy and diplomacy. In doing this, President Trump was not only bypassing the traditional media, but he was also bypassing other governmental bodies and the State’s bureaucracy. Hence, the digital revolution plays a crucial role in detecting the novelty of the effects that Donald Trump’s foreign policy had on fostering the perception of a possible decline of the international liberal order and the West as we have known it so far. 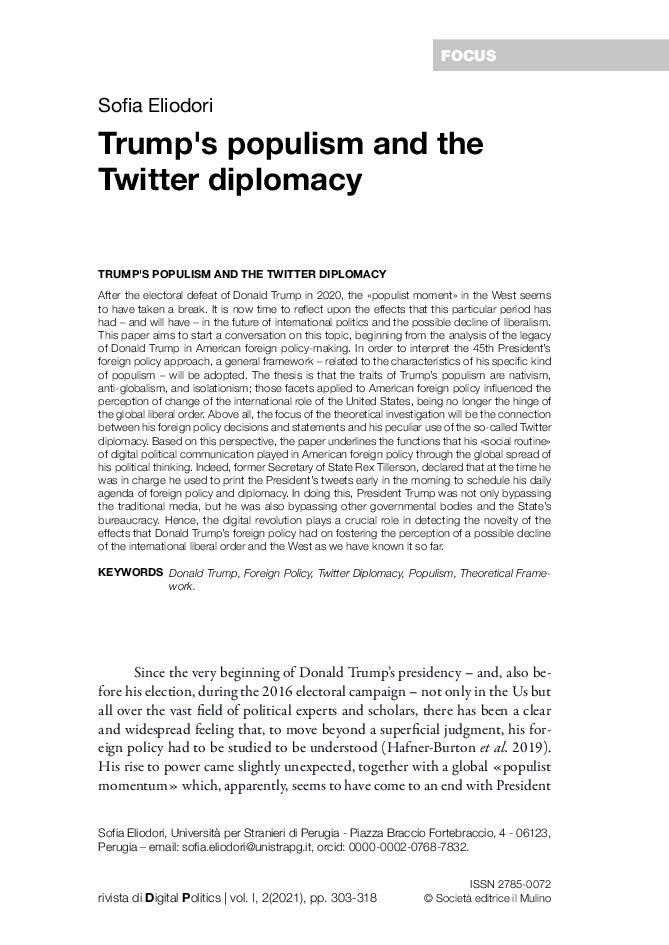