This essay reconstructs Luigi Longo's itinerary as an emblematic one: Longo known as "Gallo" was among the top leaders in the Italian Communist Party, from the line of "social fascism" and the "united front from below" to the politics of unity of action with the Socialist Party and the anti-fascist Popular Fronts. While in 1933 - when a self-criticizing rethinking began in the two wings of the labour movement and the PCd'I directed its first unitary proposals to Socialists and Republicans - Longo was in Moscow as Italian representative at the Comintern and from there he set out for Togliatti his reflections and recommendations for the Communist International. Starting in 1934, upon his return to Paris, he became a leading figure in united-front dialogue. It was he who led the PCd'I's delegation at the meetings with the Socialist delegates, which gave rise to the unity of action pact, for which he found Pietro Nenni as his main interlocutor. At the same time, the PCd'I and Longo wished to expand their political unity to the other anti-fascist forces, with the goal of building the "Popular Front" in Italy as well. Hence the contacts also made with the "Giustizia e Libertà" group, and the complex dialogue with Carlo Rosselli. For the Communists, the "popular front" in a country with a Catholic and fascist majority had to aspire to involve Catholic workers and those who were in the regime's mass organizations. The dialectic between class unity and a larger anti-fascist policy, which was developed in Longo and the PCd'I in the 1930s, was to be at the basis of the liberation struggle of 1943-45. 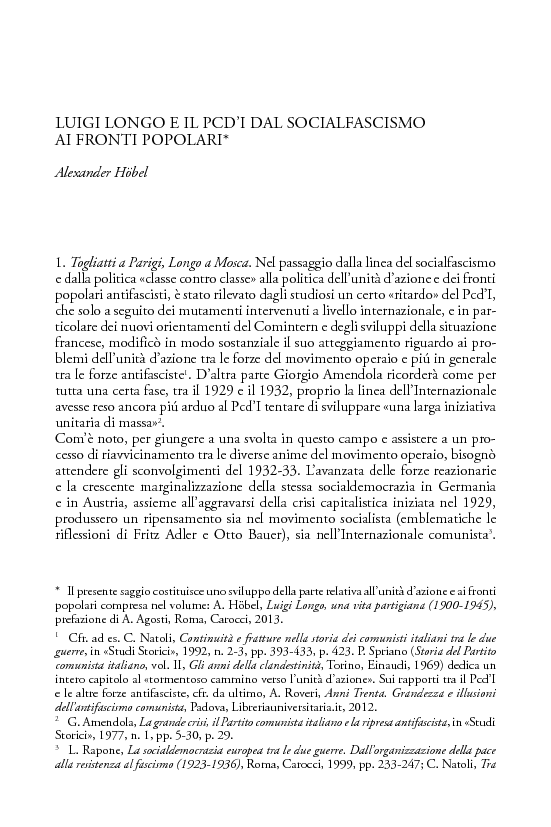