While in 1869, with the First Vatican Council, the Catholic Church attempted to affirm the vitality of the papacy and to stress the importance of the transcendent foundation of society, in Florence - the capital of the new Italian Kingdom - three committees were founded to build three different statues of Girolamo Savonarola. Through this case study and the images of the Medieval friar developed in those years, this essay offers an insight on the relationships between religion, politics and Italian identities in the few years after Unification. Debates, tensions and solutions on the role of the Catholic Church within Italian society were developed as part of a «cultural war» with a European dimension, involving values, practices, and loyalty. Since religion played a fundamental role in the Italian national-patriotic discourse, a Dominican friar became a slogan, a useful tool in the political battle, and his life was distorted according to convenience, even by anti-Catholics and anticlericals. Savonarola embodied the ambition of different political visions: a society in which Catholicism and freedom were in communication, or a society without religion and in which the papacy had lost its powers. Liberal Catholics, Freemasons, freethinkers, radicals, and Protestants were involved in these re-elaborations of Savonarola's image with different aims; but with the capture of Rome all hope for reform and renewal of the Church, as well as all hopes for a weakening of Catholicism, had faded. 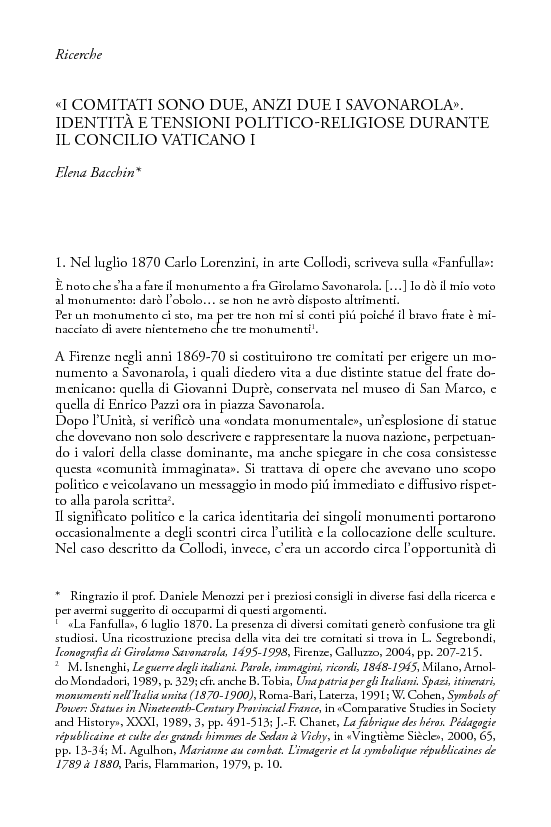