The essay will discuss several aspects of Renato Zangheri's academic-scientific commitment and political activity, without neglecting to frame them in the wider cultural and historical contexts of reference. Graduating in Philosophy under the guidance of Felice Battaglia, he was a student of Luigi Dal Pane and with him, starting in 1951, built the Institute of economic and social history of Bologna's Faculty of economy and commerce. Defined in mortem by Giorgio Napolitano as a «political intellectual», Renato Zangheri, although fulfilling for more than thirty years high and very taxing institutional offices, never abandoned the field of study and research (or academia). In 1956, he entered the Bologna City Council, where he was to hold office until 1983; from 1959 to 1964, he headed a newly founded department for cultural institutions; from 1970 to 1983, he served as the city's mayor; from 1983 to 1992, he was a member of parliament, and, after Giorgio Napolitano, also directed the parliamentary group. In the meantime, he held important party positions: he was member of the Central Committee from 1980 to 1989, of the Directorate from 1979 to 1989, and of the Secretariat from 1983 to 1986. His activity in building instruments for the organization of culture was noteworthy: as examples, aside from the national level, one may cite experiences that are largely forgotten today, but of great cultural depth on the local level, such as the «cultural circle» which brought together eminent intellectuals - and even non-communists - from a variety of fields of knowledge and from different generations. Lastly, he was instrumental in the founding of San Marino's School of historical studies. Although Renato Zangheri was already sixty-six years of age when he abandoned active politics, he launched himself into a new intellectual adventure that was left unfinished: his "Storia del socialismo italiano". 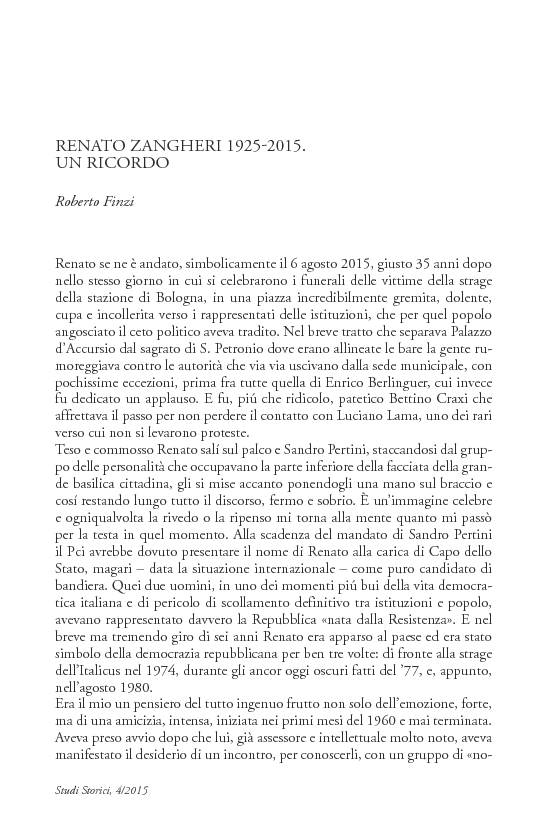