The Roccagorga massacre (January 1913) and the «Red Week» (June 1914) are two episodes to which Gramsci refers several times in his Prison Notebooks and in various articles published between 1916 and 1926. I shall argue that these are very precise references to the harsh debate which took place in Italy in the wake of these two episodes, involving the director of the PSI newspaper and the leader of the party's left wing, Benito Mussolini, the main representatives of the party, and several Italian politicians, writers and intellectuals. Mussolini drew a close connection between Roccagorga and the «Red Week», against and beyond the Socialist party's official line, arguing that this had been the first great attempt at an autonomous unification of the popular masses from southern and northern Italy. This argument is at the centre of Gramsci's interest in subsequent years, when he outlines his interpretation of fascism as a political movement which both expresses and disfigures the most profound aspirations and demands of the popular masses. In Mussolini's deviation within the socialist movement, these aspirations and demands found a development which was also an interruption, since they were channelled towards the form of «national socialism» that would eventually merge into nationalism and imperialism. In this sense, it can be said that the connection between Roccagorga and the «Red Week» is key to understanding the roots of Gramsci's qualification of fascism as a «passive revolution». 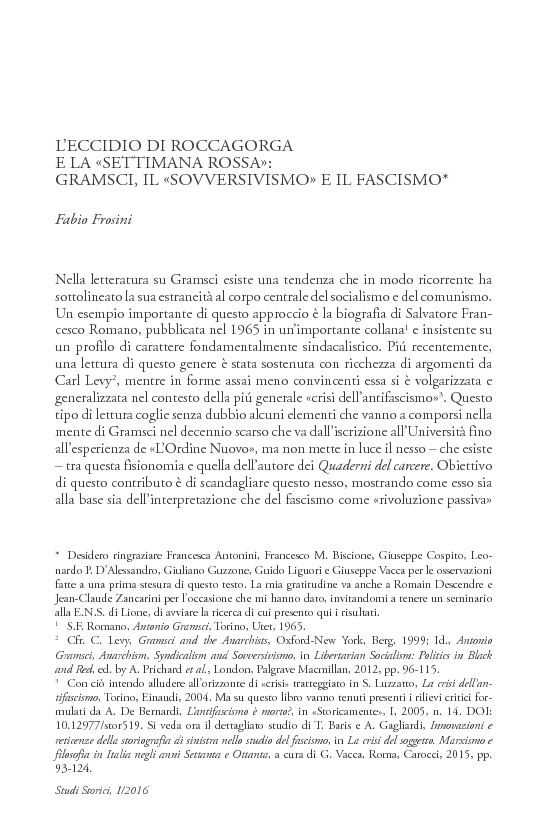