French Sub-Saharan Africa's decolonization - which occurred between 1958 and 1960 - had particularly interested the Italian Communist Party for ideological originality shown by anti-colonial parties into the struggle for independence. The ideas of self-determination of peoples subjected to European domination, influenced by Marxism, by the French Communist Party and by the socialist world, it developed, however, a kind of nationalism that was independent from the working-class design and taking into account a mass of underlings ready to rise again and to gain freedom and self-awareness. If the Pcf struggled to give support to those same African movements that it had influenced himself, the Pci, that was intent on carving out a political space just inside the socialist camp, was very interested in the «afromarxiste» and nationalist experimentation in the French colonies. Especially after 1956, at the end of the Cominform and at the begin of recognition of «national roads to socialism», the Italian Communists intertwined relationships with the government of independent Guinea (1958), led by Sekou Toure, with the independence movement of Cameroon, "Union des populations du Cameroun" (Upc), with Mali led by Modibo Keita and with the "Parti africain de l'indépendance (Pai) in Senegal. The Communist Party and its idea of Africa" also influenced the vision that the Italian Left and its cultural environment had about this territory. 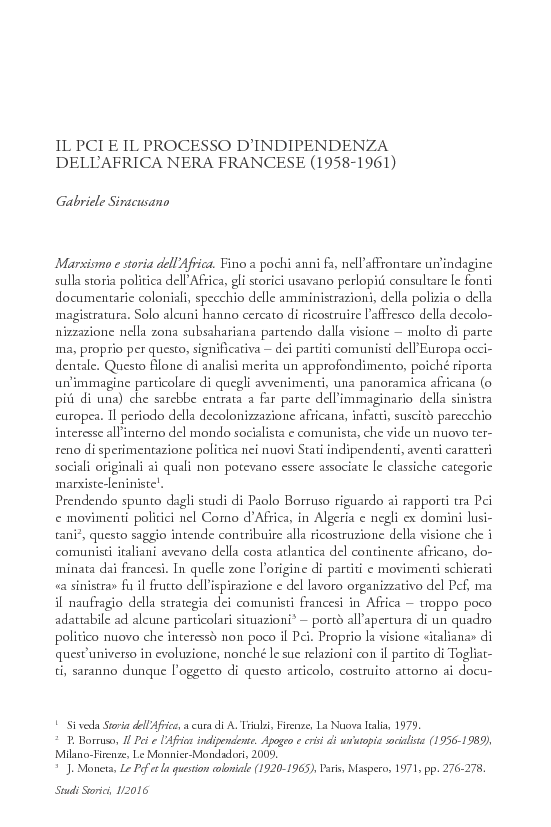