The public debate on agrobiotechnology is, at present, intense and, occasionally, ideologically polarized. A causal model explaining acceptance of gene technology developed by Siegrist (1999, 2000) was tested in an Italian sample. According to this model acceptance of biotechnology depends on three variables: perceived risks, perceived benefits and trust. Along with this model, we also tested the role of pro-environmental orientation as measured by the revised Dunlap and Van Liere's (2000) New Environmental Paradigm (nep) Scale. It was hypothesized that intention to consume genetically modified food is function of trust, perception of benefit, and negatively of perception of risk, and pro-environmental orientation. A sample of 1,009 Italians of at least eighteen years of age took part in a telephone survey. Results demonstrated that trust, perception of risk and benefit and pro-environmental orientation influence intention to consume genetically modified food. More specifically, the most important predictor was perceived benefits, whereas the measure of trust was not particular determinant with the exception of trust in political institutions, mass media, and multinationals. A pro-environmental orientation did explain a significant amount of variance; however its influence was not always in the expected direction. 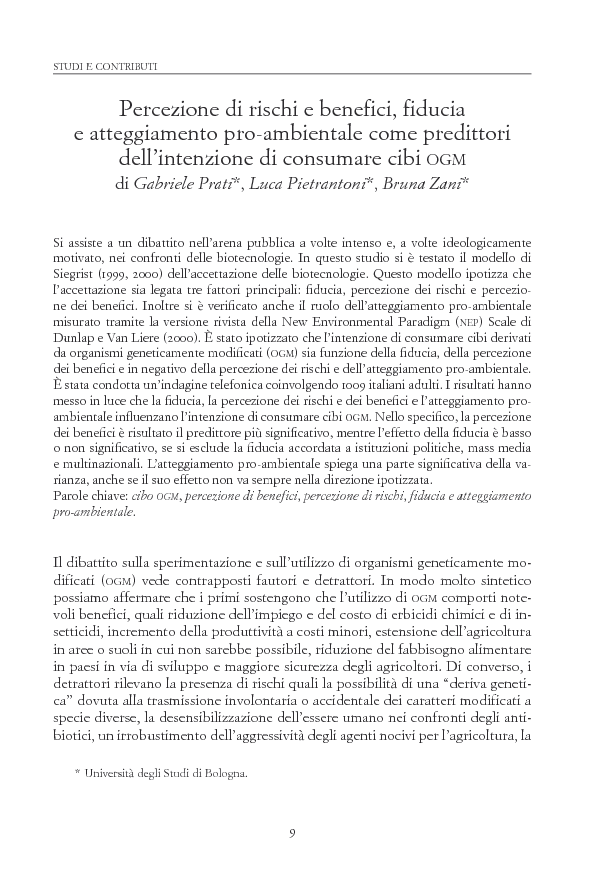