This work aims at adapting the Adolescent Personal Uniqueness Scale to the Italian population. The scale assesses the perception of personal uniqueness, understood as the perception by adolescents of their being special and distinct from all others in their individuality. The uniqueness represents one of the dimensions that structure the personal fable, part of the new theoretical perspective regarding the intellectual egocentrism in adolescence (Lapsley, 1993). The Adolescent Personal Uniqueness Scale, translated and adapted to the Italian population, was administered to 211 adolescents aged between 16 and 19. In addition, we set out to examine possible gender differences. Another aim was to assess the validity of divergent/convergent Uniqueness as compared to other constructs of psychological distress (social anxiety, loneliness). These constructs were selected, on the basis of the indications provided by the literature indicates that significant positive and negative associations between them (Gossens et al., 2002; Laspley, 1993). The statistical analysis made it possible to verify the internal consistency and the factorial structure of the scale. The results confirm the validity and reliability of the Italian adaptation to the original scale. Even in the Italian version the scale seems to be useful to investigate the perception of uniqueness by adolescents. There were no gender differences in our sample. Finally, the results confirm the convergent validity. 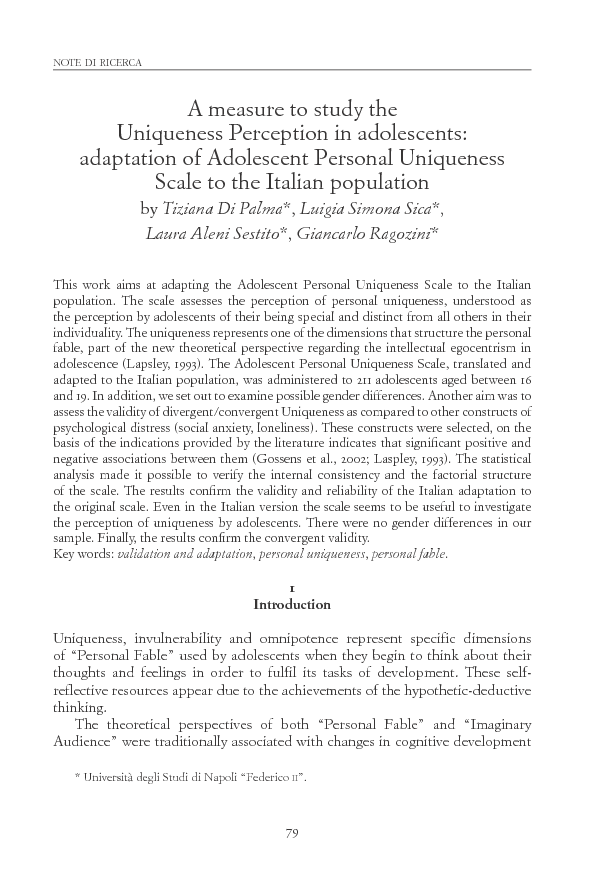