This paper investigates the transition from a sillabic conceptualization writing to a protoalphabetic or to an alphabetic one. The transition represents an important focal point in children's writing system process. When children include single letters to represent single sound units (phonemes), they are showing, even not necessarily with the conventional grapheme or in the right position, a progressive approach to alphabetic writing and to the acquisition of a better ability in analyzing oral language. It is a complex and nonline¬ar transition in which new consciousness appears with the old-strengthened knowledge. Following this perspective, the omission or substitution of letters is not considered as the result of inability in analyzing oral but as the efforts of changing a syllabic construction and representing sonorous units, smaller than a syllable, in writing. In the present study, the longitudinal observation aims at showing the development of syllabic writings in a group of fourteen Italian preschool children attending a middle-class school in the city of Rome. The observed group is composed by 8 girls and 6 boys. In particular we would like to check whether the inclusion of single letters is related to the different nature of syllables (CV or CVC or CCV). The observations mainly focus on the qualitative analysis of CV, CVC and CCV Italian word writing production. 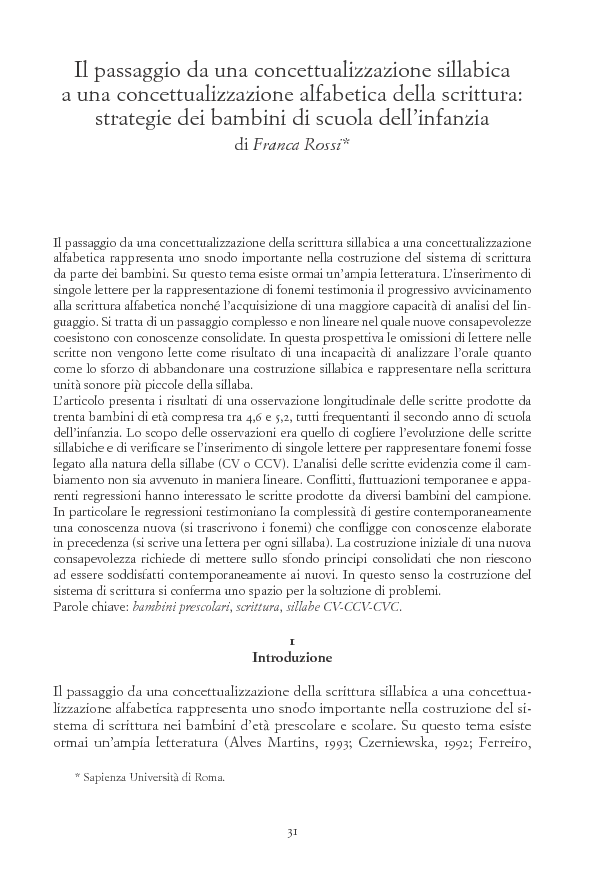