The "Jobs Act" has been announced as urgent structural reform requested by Europe to make the extremely rigid Italian labour market more flexible, in order to contrast the dualism among protected workers and those without protections at all, and to guarantee them with some safeguard in the market. In addition, it launches a "confidence campaign" for firms and markets, to induce growth in labour demand and then increases in employment in exchange of more entry and exit market flexibility. It is a for the umpteenth time reform of Italian labour market, that - differently to the previous ones - wishes to tackle the dualism among insider and outsider to extend market protections to everybody, transferring existing protections in the job to the market, extending them to the outsider with support of the public actor. It will be true all this, or will be just one more announcement? And, more important, is it what we really need? In this paper, we discuss some "omissis" in the "legge delega" (in the Italian Constitutional right, a law approved by the Parliament which delegates the government to exert legislative power on a defined object) approved by the Italian Parliament and contradictions present in this latest announced reform that seems at zero cost and in "continuum" with the previous reforms starting in the '90s. Notwithstanding an¬nouncements inviting to bet on the confidence effect for firms and markets, being free from constraints of labour regulations, the Italian economy structural problems remain all on the table, decades of productivity stagnation first, and those related to aggregate demand and its composition, exacerbated by the state of deep depression for the Eurozone. The "Jobs Act" does not provide any answers to these problems. 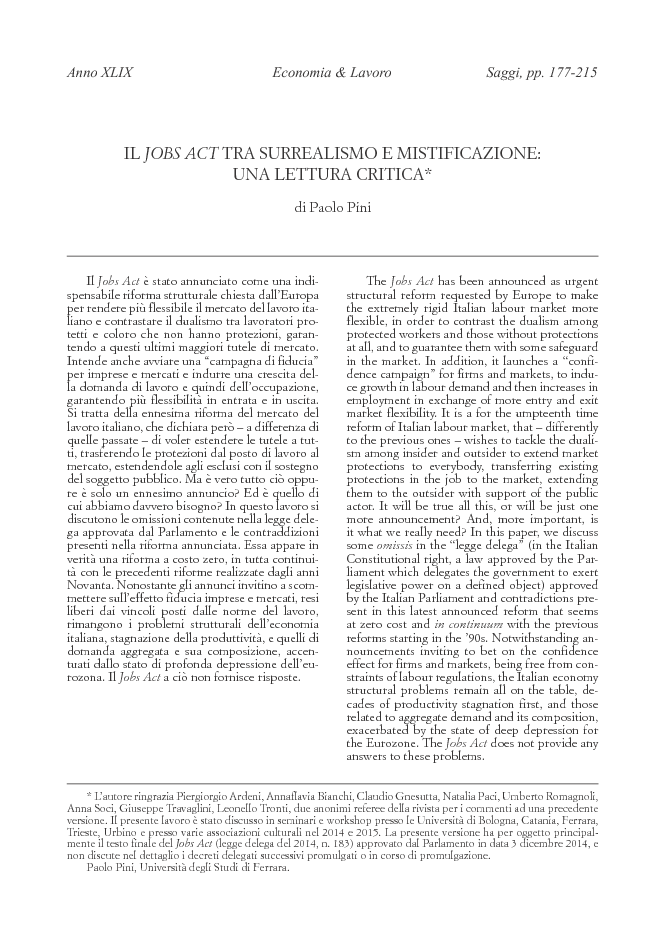