In practice languages are not taken into consideration as an explaining factor of European politics. Apart from a few cases, the literature on European integration ignores the issue. Given that social scientists have to compete in the international research arena, they generally tend to ignore the linguistic dimension of their research and abide by the rule of writing and publishing in English. This is a paradox: in EU politics there are plenty of cases in which linguistic problems have caused misunderstanding (recently the German finance minister Schaüble recognized that when dealing with his Greek colleague Varoufakis, he was «fassungslos» - literally: without conception). Considering language is the key communication channel for politics, this appears even more paradoxical. At the same time, English language competence varies considerably across the EU, opposing countries, groups of countries, genders, age groups and people depending on their level of education. Yet, English has now become "the language" of EU politics. Although currently available tools for an easy and rigorous assessment of language skills are not so widespread, the polarization of English competencies in the EU is increasingly acknowledged. This makes the idea of «English as lingua franca» (a vehicular language) for all Europeans appear as a fallacy. In fact, European citizens who don't master standard English are excluded from full participation in EU politics. At the same time, there is a further divide that cuts across all EU countries, opposing the defenders of European integration to its enemies. As the latter tend to become more and more numerous and trust in the EU tends to decrease, the amazing association between three characteristics of European citizens - their English proficiency, their being pro or against European integration and their level of education and training - needs to be seriously addressed. 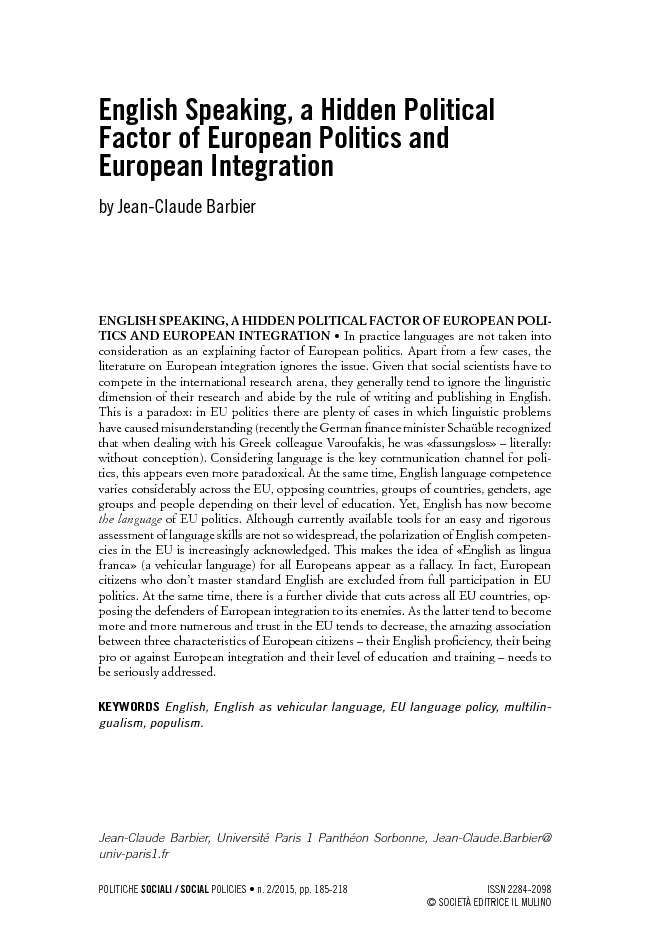