Over the last decades, the political and academic discussion on university governance has been characterized by two different perspectives. On the one hand, New Public Management: according to this approach universities are seen as institutions that operate in a quasi-market in which political authority appoints external agents, and introduces a variety of incentives aimed at guaranteeing that universities' aims and interests, and those of the individuals working for them are in line with the established goals. On the other hand, a neo-institutional perspective which is primarily based on the consideration that good higher education requires a combination of very different types of resources and competencies. According to this perspective universities are seen as publicly regulated institutions, whose main aim is to enhance the cooperation among the different components of the tertiary system, and balance the interests and investments of all relevant stakeholders. Against this backdrop, the article discusses reform law 30 December 2010, no. 240 which provided a comprehensive overhaul of Italian universities' governance. The authors use a unique dataset on Italian universities to investigate what are the actual governance patterns that emerged from the reform, and that do not necessarily reflect the formal provisions uniformly. The evidence shows that, despite a common regulatory framework, Italian universities have implemented quite different models of governance. Such models range from a highly vertical to a shared governance model. Furthermore, the data confirm our hypothesis that in many (although not in all) universities the stakeholders that control crucial cognitive resources and investments in the university tend to introduce rebalancing measures in order to prevent opportunistic behavior that would otherwise expropriate their investments. 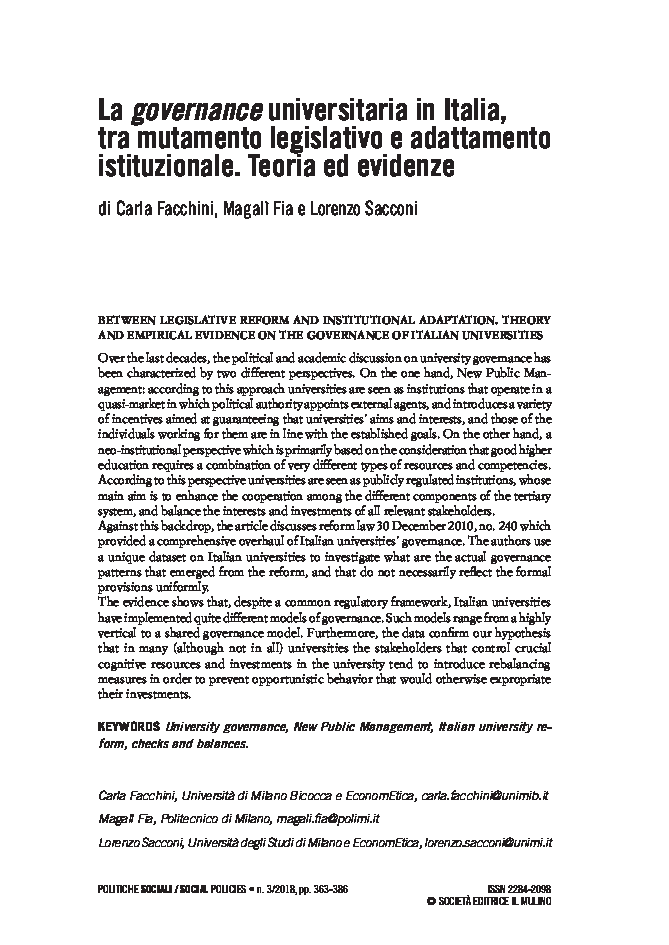