Immigration and asylum became tremendously contested in Italy over the last decade. Especially since 2017, left-leaning executives eroded asylum rights for the sake of competing with their right-wing opponents. The climax was then reached in 2018, when Matteo Salvini – leader of the far-right Lega party and newly appointed Minister of the Interior – authored the «Security Decree I» as a spearhead of his anti-immigration platform. These new provisions restricted the access to, and the contents of, international protection, along with the role of local governments in policymaking. This article explores the shockwave of this restrictive turn on «virtuous» systems of urban asylum governance, as well as their capacity for resistance. Theoretically, the study draws on the multi-level governance approach to migration studies, which is however complemented through an enhanced analytical focus on conflictual and horizontal interactions. Empirically, we present a case study research on Bologna and Parma. The asylum systems of these two cities – consisting of small-scale, high-quality reception centers and based on sustained cooperation between state and non-state actors – were put under heavy pressure. However, only Bologna proved able to (partly) resist the asylum crackdown and maintain the cooperative relations between state and non-state actors. This outcome owes to a set of driving forces at the local level – namely, a left-leaning local government and political subculture, a long-standing tradition of progressive welfare policies, and a vast constellation of civil society organizations. We suggest that these findings have significant implications for practitioners wanting to oppose anti-immigration policies locally. 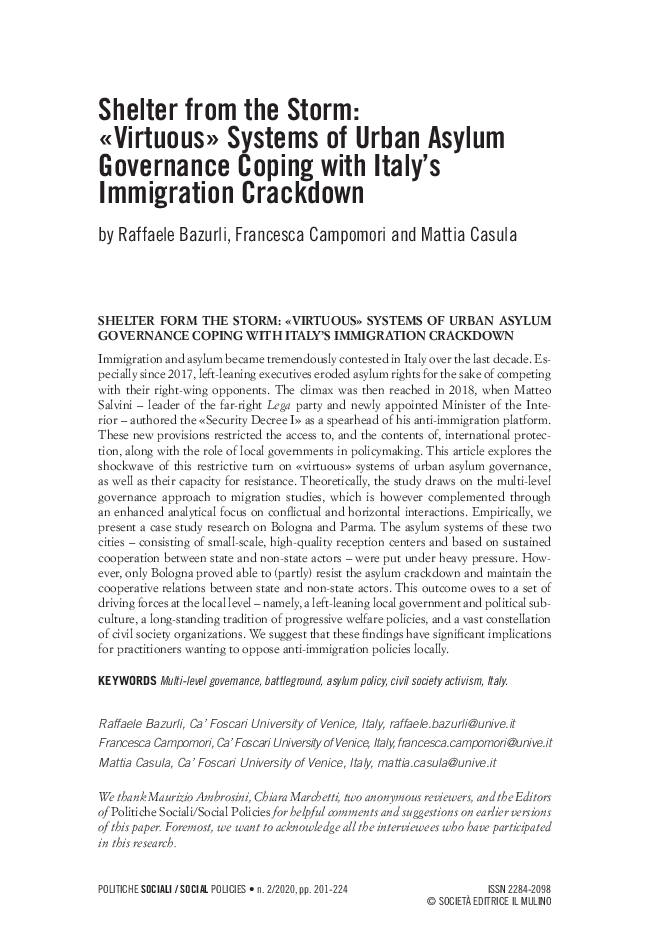