This paper argues that speaker's utterance is shaped not only by recipient design but also by salience. While fitting words into actual situational contexts speakers are driven not only by the intent that the hearer recognize what is meant as intended by the speaker, but also by individual salience that affects production subconsciously. The interplay of these social (recipient design) and individual factors (salience) shapes speaker utterance. Recipient design is the result of being cooperative, which, according to Grice is a part of human rationality. This paper, however, claims that individual egocentrism that results in individual salience is just as a part of human rationality as cooperation. It will be argued that salience, which is the main driving force of egocentrism functions differently when an interlocutor acts as a speaker, or when s/he acts as a hearer. If a lexical unit (labeled for a private context) is used by a speaker to produce an utterance, private contexts (prior experience of the speaker) attached to this lexical expression are activated top-down in a hierarchical order by salience. For the speaker, there is primarily an inter-label hierarchy, while for the hearer intra-label hierarchy comes first. The inter-label hierarchy operates in the first phase of production, when a speaker looks for words to express her/his intention. The effect of individual salience (which is usually uncontrolled) may result in uttering semantic units that make their own context, and occasionally may cause misunderstandings. It will be claimed and demonstrated through examples that recipient design usually requires an inductive process that is carefully planned while salience effect generally appears in the form of a deductive process that may contain repairs and adjustments. The speaker has something on his/her mind, and this intention is formulated abruptly, rather carelessly without specific planning. At the same time the two aspects of speaker meaning (individual and conversational) give the chance to the speaker to manipulate speaker meaning according to his/her needs: leave meaning conversationally open for interpretation or signal his/her intention with cues and markers. It will be argued and demonstrated that speaker meaning can usually be underdetermined from the speaker's perspective only if the speaker leaves it underdetermined deliberately, or as a result of salience effect. 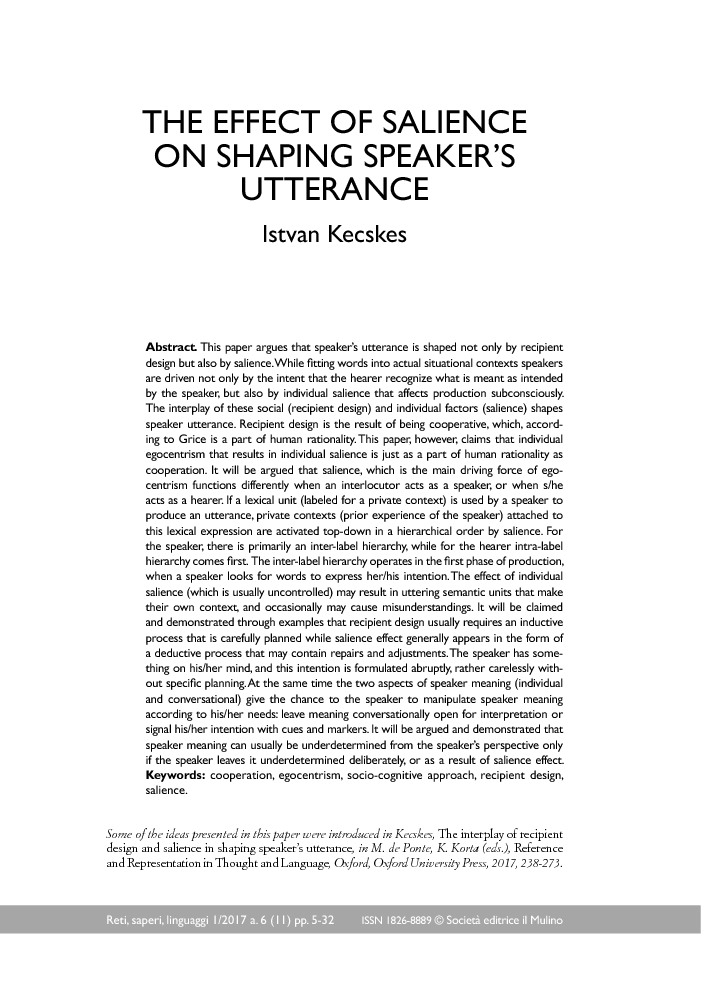