Although Tuscan Jews enjoyed a legendary reputation in the enlightened public sphere of Germany, intellectuals of the Tuscan Enlightenment clung to traditional anti-Jewish religious prejudice. The academies of the Tuscan Enlightenment refused to admit Jews. Similarly, the new philosophical journals appearing in Florence did not adopt the idea of religious tolerance. On the contrary, they continued to propagate traditional Christian anti-Judaism and to reproach the Jews for not recognizing Christ as the Messiah. Indeed, even the Jewish establishment had little interest in intellectual exchange with Christian scholars. Prosperous Jews, who left behind considerable wealth and possessions, owned few books or works of art that indicated an interest in secular education or scientific questions. Likewise, the rabbis of Florence and Leghorn rejected all attempts at religious reform. In sharp contrast to the deeply rooted anti-Jewish resentment of the Tuscan enlightenment, leading figures of enlightened reform politics had a favorable opinion of the Jews and the Granduke Pietro Leopoldo was deeply respected by the Jewish communities in Tuscany on account of his pro-Jewish politics. In the 1870's, however, a change began to take place in Tuscan Enlightenment journals regarding the Jewish minority and religious tolerance began to be discussed from a new point of view. A new interest in secular education also grew in the Jewish communities. The decisive impetus for this new vision of Jewish emancipation came from the Austrian Emperor Joseph II's politics of tolerance and Christian Wilhelm Dohm's work on the "Civil Improvement of the Jews", which was, albeit at a relatively late date, translated into Italian. 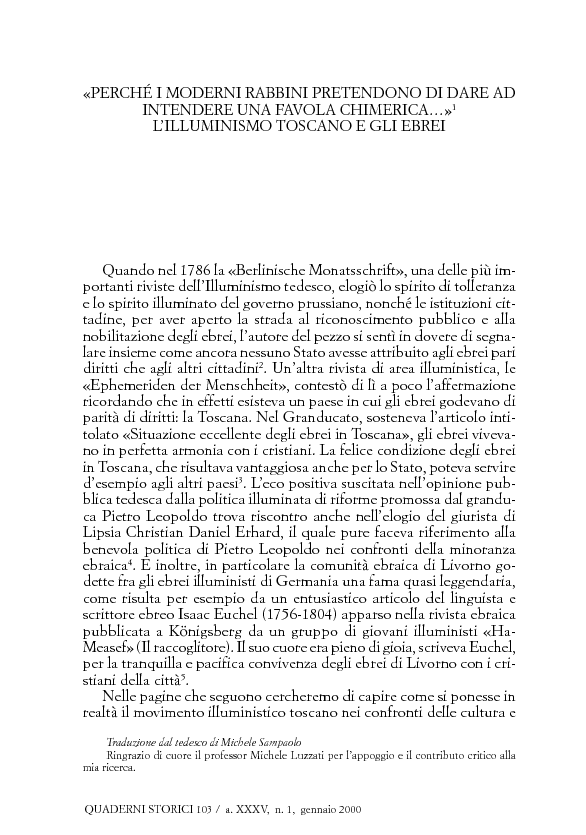