In this article I want to suggest that the collection of records known as the «Archive of the Khans of Khiva» does not reflect a centralised system of record keeping as historians of Central Asia have assumed since its (re-)discovery by Pavel Ivanov in 1936. In fact, the Khans of Khiva never pursued a documentary project by conferring specific relevance on the systematic preservation of records. In this regard, I show that a significant proportion of the content of this collection was destined to be disposed of immediately after their compilation and reading, while the remaining parts of this documentary assemblage were not designed for long-term preservation either. By pursuing further this line of thought, I want to make two distinct but interconnected arguments. First, I contend that the contents of the «Archive of the Khans of Khiva» reflect Russian Orientalist interests in manuscripts. Such interest was not intrinsically academic. It was spurred by the military to showcase colonial trophies in the imperial metropole, that is, evidence attesting to the accomplished domestication of the Central Asian khanates. Second, and more importantly, the presumed unity of the Khivan collection is entangled with the biography of Ivanov, who exploited the recovery of documents in Khorezm to immortalise himself as the discoverer of the «Archive of the Khans of Khiva». Prior to Ivanov, the Khanate of Khiva did not have an «archive», at least not in the sense in which Ivanov understood and used the term arkhiv1. 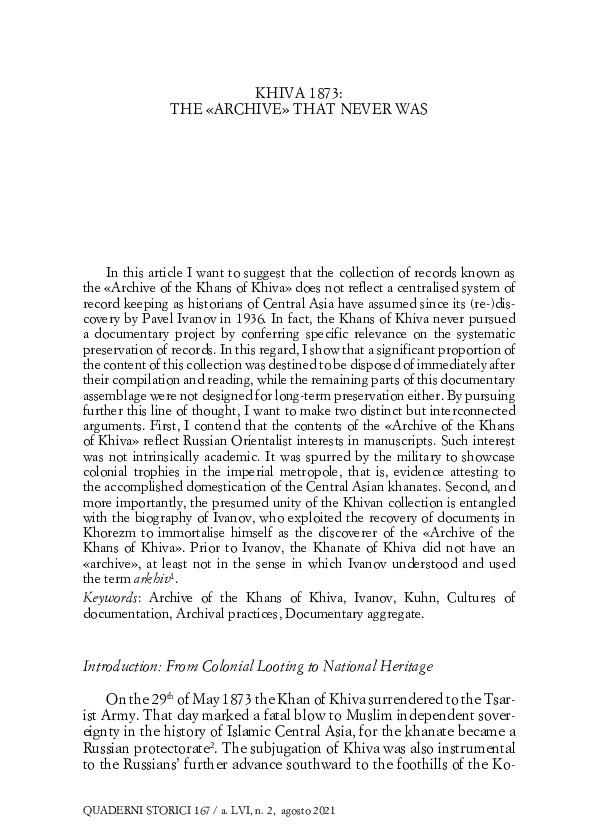