This paper deals with empiricism in late-Scholastic medicine. It shows that in Scholastic-Aristotelic medicine empirical data in principle make sense only if they are related to theories (as can be seen for instance in the evolution of "consilia" literature and in pharmacological precepts). In the 14th and the 15th centuries, however, there is a new tendency to separate theory and practice from each other. This separation is exemplified through a sketchy analysis of the role of experience in the writings of Arnaldo da Villanova, Tommaso del Garbo and Bartolomeo da Montagnana, and it is also compared with the critique of medicine expressed in the 15th century humanist controversy about the arts ("Disputa delle arti"). In relation to the problematic picture outlined above and with special attention to the "narratio" of natural-medical particulars, the paper considers the letters sent by court physicians describing the daily course of disease of several members of the Sforza family in 15th century Milan. These punctilious reports of medical data contain "facts without theory" and are in agreement with the attention for particulars which can be found in some trends of late medieval medicine. The paper argues, however, that what we find in these medical reports is still a far cry from the epistemological separation of theory and facts which was going to be later proposed by Francis Bacon, with a polemical and innovatory aim, as a new set-up for scientific research. 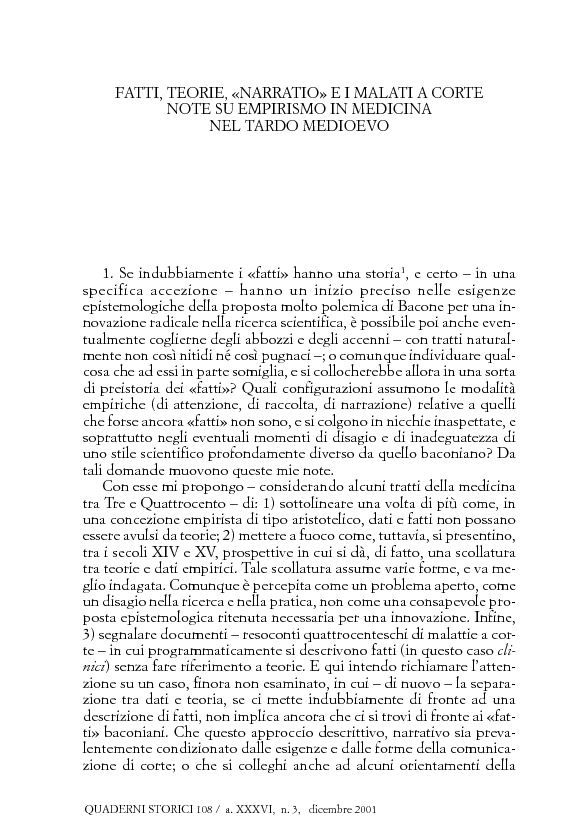