How long is a fact? Facts differ from other kinds of empirical report in their studied neutrality with respect to interpretation and conjecture, and in their brevity. Neutrality and brevity are related traits: the pithier the fact, the less likely it is to be adulterated with the "esprit de système". Or so seventeenth- and eighteenth-century proponents of facts as the foundation of a reformed philosophy of nature believed: starting with Francis Bacon, they deliberated over how best to truncate and circumscribe observations so as to safeguard their purity. To these ends, they adopted and reworked older literary forms like the aphorism (traditionally associated with medicine) and the numbered list. Numbered observations and tables became the standard mode of presentation in Enlightenment natural history, and also in many works of experimental natural philosophy. The logic of these literary forms was fragmentary, arbitrary, and combinatorial. Although observations were usually performed continuously over days, weeks, or months, observers pulverized their journals (which were punctuated only by dates and perhaps time of day) into the units of facts. As in the plying of any literary genre, considerable finesse was required to segment the continuum of experience into the proper length and heft of a fact, which seldom exceeded two pages. The sequence of numbered observations rarely corresponded exactly to the chronological order in which they were performed, and was sometimes organized thematically. But just as often naturalists emphasized the arbitrariness of the ordering, on the analogy of the Encyclopedists who made a virtue of the arbitrariness of the alphabet. In both cases the justification was combinatorial: short, distinct units that could be endlessly permuted as occasion and viewpoint dictated, because each was self-sufficient and bound to the others unsystematically. Ideally, facts could be shuffled like cards, and mobilized to support an indefinite number of arguments. They were information, rather than knowledge. The tools of the table (and later the historian's notecard) served the same ends, and even more militantly. Tabular entries were abbreviated, whether represented as words or numbers; the correlations mapped on abcissa and ordinate could be varied "ad libitum". The innumerable draws and crannies of the naturalist's cabinet or vitrine was the three-dimensional embodiment of the same factual habit of division, arrangement, and re-arrangement: specimens representing the genus or species were isolated and shelved, to be re-shelved as new classifications demanded. All of these templates - the numbered observation, the table, the cabinet, the notecard - fostered practices that made facts in natural history possible. Anyone could observe nature, but only the seasoned naturalist could craft a fact out of observations. Focused attention, meticulous record-keeping, and mastery of tools were preconditions for facts, which were chiseled out of experience as a statue is from a block of marble. These practices of the fact in natural history were linked to a nominalist ontology and an epistemology that regarded knowledge as tentative and fluid, steady only in its smallest units. 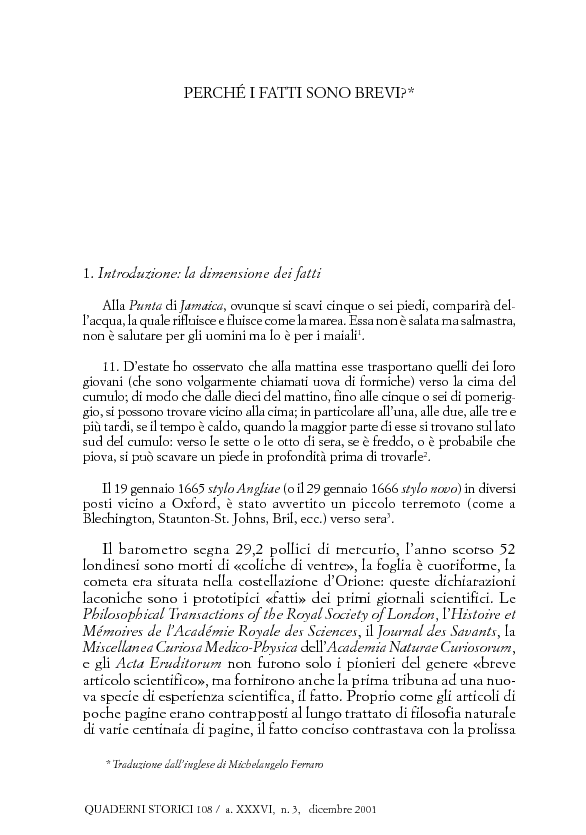