This study provides an ethnographic analysis of the pastoral mountain territory of Yagur in the High Atlas of Marrakech, Morocco and estimates quantitatively its agroeconomic contribution. The Yagur is governed by the institution of the agdal, a system for the communal management of natural resources of the Amazigh (the Berber ethnic community). The local version of the agdal consists in a three-month ban on herding, mainly in the spring, to allow regrowth of the vegetation, and in ensuring that all households have equal access to pasture. At the same time, the integration of the traditional agdal within local religiosity and its associated ethics entail a local conservationist and egalitarian set of values. Specifically, we focus on the economic pastoral contribution of the Yagur to the population of the Ait Ikiss belonging to the Mesioua tribe. Field work was conducted in all agropastoral seasons from 2003 to 2008, totalling a full year (12 months) of living with the Ait Ikiss. The main finding of the study is that the Yagur generates up to 18% of its users’ annual agropastoral gross monetary income through its supply of fodder. Nevertheless, since it is impossible to produce precise and detailed accounting in a society that is nowhere near to monetizing its entire production, we present complementary qualitative data throughout the text to provide a better picture of the full range of agroeconomic and eco-anthropological dimensions of the agdal. We conclude that, although highly underestimated by national administrations, the agdal, which extends across almost the entire Atlas Mountain region and thus covers thousands of square kilometres of key and fragile ecosystems, should be considered as an important practice for the peasants’ livelihoods, for the continuity of local agropastoral economies, and for the socio-ecological sustainability of present Magrebian mountain environments. 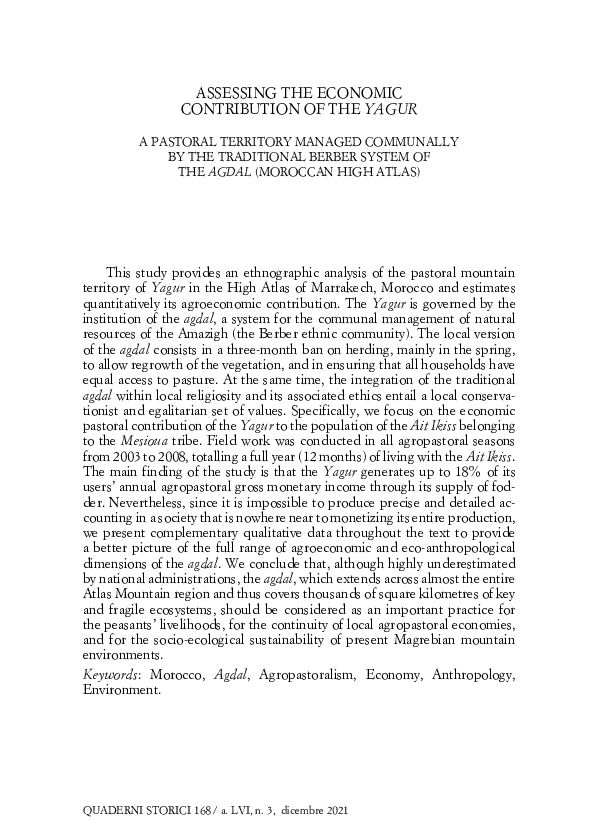