Maritime "Average" refers to partial damage affecting one or more parties directly interested in a maritime voyage. In certain cases, and under certain conditions, the cost of this damage can be redistributed among the ship-owners and cargo owners by means of a procedure: "General Average". This is possible thanks to a very ancient piece of maritime law which assumes that all members of a maritime venture form a single community of solidarity. Faced with common danger, self-interest is forgotten, and the collective whole becomes a guarantor for the parts. The archives of maritime courts preserve an impressive number of acts which show different commercial actors confronting the problem of estimating the two sums in play which determined redistribution: the value of the whole, and the value of the part which was sacrificed. This type of documentation could, in theory, provide us with econometric data which in turn could allow for statistical analysis. The following microhistory demonstrates the limits of that approach by identifying certain contingencies which shaped these procedures and the gap which existed between theoretical assumptions and their translation into the real world. This investigation is based on a 17th century cause célèbre, a General Average adjudicated by the Consoli di Mare in Pisa in 1670 which became the centre of a diplomatic controversy between the English and Tuscan governments 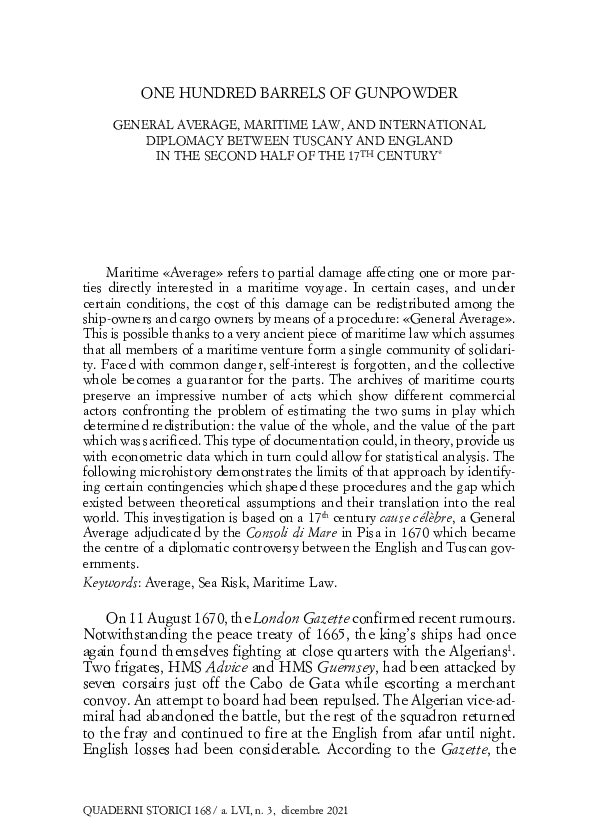