This paper, which is part of a more extensive work on the Jewish community in Florence at the time of emancipation, focuses on the analysis of the economical behaviour of the Jewish mercantile elite during the nineteenth century. Using a biographical/relational approach, the author reconstructs the cooperation networks activated by a group of selected Jewish agents (bankers, merchants and entrepreneurs) in the Florentine and Tuscan market between the nineteenth and the twentieth century. The aim of the essay is to discuss within the frame of a case-study the economical theory of "competitive advantage" and, where this is possible, to underline its limits in this context. According to the evidence discussed by the author, the economical action of the Jewish-Florentine agents lost its effectiveness throughout the century. The tendency to keep the cooperation networks within the boundaries of the minority, the persistent osmosis between economical and family networks, the predilection for traditional forms of investment, inhibited the potential for economical and social rise of the Jewish business elite. In a modernising context, the advantage deriving from a competence acquired throughout the centuries and from a network of connections, both personal and commercial, based on the ethnic factor, was turned into a weak point. 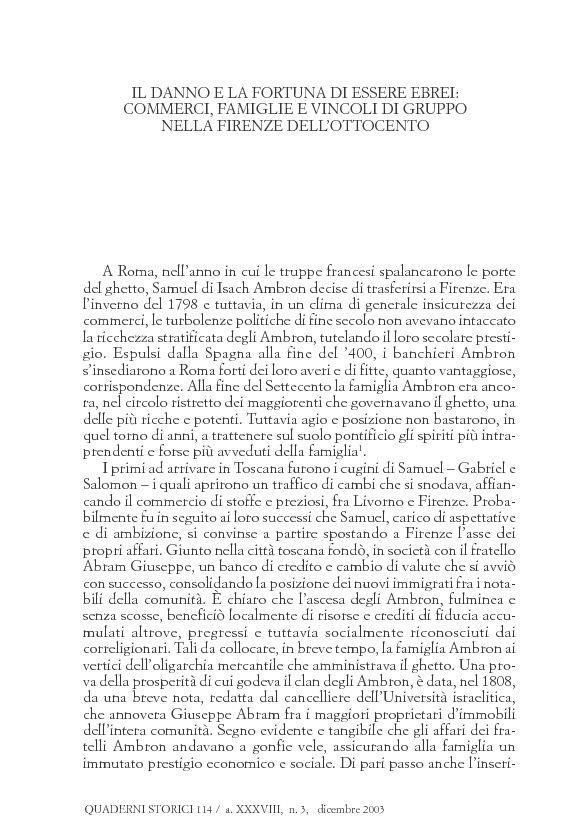