The eighteenth century roman art market, based on the analysis of saleand- demand and respective dealers, exhibits at least three different classifications. The high level, involving the richest demands by partakers of the Grand Tour, the mid level, characterised by individuals who would spend around a hundred roman scudi on art, and the lowest, connected to thousands of individuals who invest ten scudi or even less. Though hard to follow, the latter is vital to the art system as during this period art consumption has become a widespread phenomenon. The roman-born Giuseppe Sardi (d. 1772), besides being a famous master mason and architect, is also an art dealer who works in the low level through a stock of more than one thousand seven hundred pictures. Thanks to the flexibility of his collection, Sardi is able to satisfy a vast range of clients, one of his more popular services being renting in bulk the high quality furnishings for entire apartments. This option perfectly meets the needs of young clergymen or nobles, who only later will inherit their share of the family collection, in a similar manner to the prospective cardinal, Giuseppe Garampi, or the countess Caterina de Meravilles. This method, as well as the general strategy of investment, is typical of the mentality of Sardi's main profession, as is clearly shown by the analysis of some other master masons of the same period. 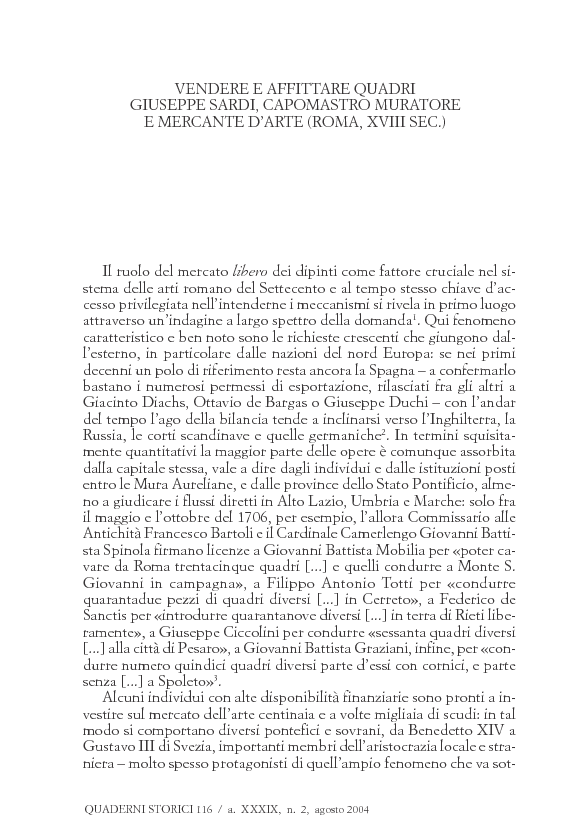