In 2004 the German multinational Thyssen-Krupp announced the closing of the magnetic steel plant it owns in Terni, Italy. The announcement was met with widespread protest including physical confrontation and mass demonstrations. Throughout the struggle, there were constant references to the memory of Terni's rebellion against mass layoffs at the steel plant in 1953. Historical memory was a rallying point, especially since the very identity of the city has been constructed historically around the steel works and its working class. On the basis of oral history interviews conducted in Terni in the 1970s and '80s, and again in 2004, the paper analyzes the uses of memory and the analogies between the struggle of 1953 and that of 2004; it also explores the differences (a different generational composition of the workers; the impact of youth culture and football culture; the role of anti-German sentiment harking back to the Resistance as well as to nationalist stereotypes; the lack of a revolutionary perspective that was still very vivid not only in 1953 but still in the 1970s). The last part of the paper is a report on a visit and a set of interviews at another Thyssen-Krupp steel plant, in Nashik, Maharashtra, India, comparing strategies and labour policies, and instigating on the local impact of the events in Terni. 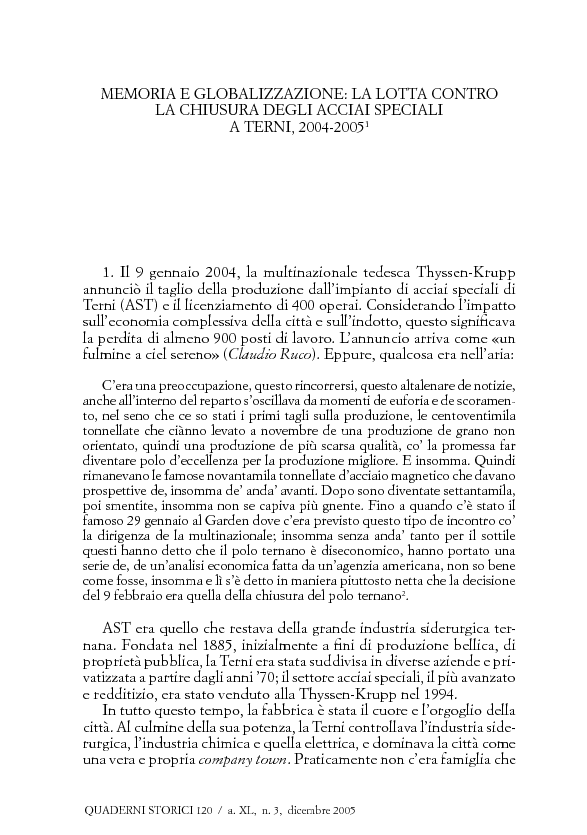