The essay rethinks the well-worn tale of East/West commerce, examining India's textile trade over centuries. I suggest the significance of the early impact of the direct contact between Europe and the Indian subcontinent, refocusing the chronology to give a fuller picture of Indian/European interactions. The role of Asian commodities in the genesis of a fashion system in Europe has been largely unexamined and will be introduced here, a preliminary study of a broader work. I search for the appearance of fashion in Europe as a cultural catalyst to consumption, a self-perpetuating dynamic force, urban in origin, diverse in expression, where the economic and cultural stimuli to demand were manifest. In this long chronology, Indian cottons played a uniquely important role in world history as an agent of new consumer tastes. Over the long span of history, it must be acknowledged that Indian cottons were the first global consumer commodity. The later industrial transformation of the cotton industry, and the tremendous importance of export markets for Britain and other nations after 1800, suggests the significance of established international consumer demand for cotton. Indeed, the world markets and networks constructed through the centuries-old trade in Indian cotton are surely as important as the various national histories of industrialization which followed. In shaping markets and serving fashion, Indian cottons prepared global consumer markets for the modern industrial age. 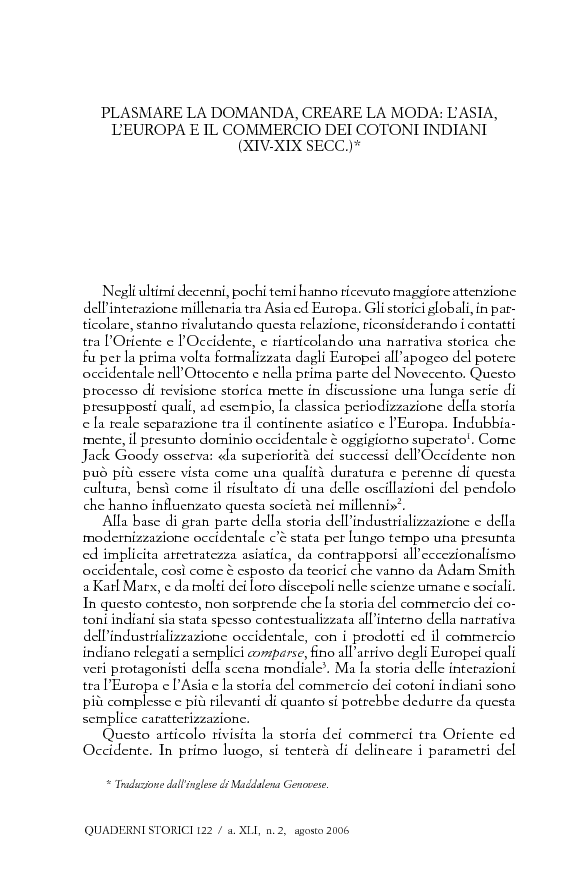