Contemporary history of Paris is often represented as a coherent process through which the city progressively restructured itself into a new modernity to make it the "capital of the nineteenth century". This modernity is identified with the sociability of the boulevards and with an urban leisure aesthetic fluctuating between the dizziness of café and theatre society, and the solitary pleasure of "flânerie". It is also illustrated by the expansion of commerce and mass consumerism, and by an active urban policy, which transforms the face of the city. These aspects are all undeniable important. However their generalisation over the whole city for the whole century has concealed the numerous tensions and the dramatic discontinuities, which accompany the process. In parallel to the glittering boulevard culture, other forms of modernity and sociability developed within the city. The old "quartiers" of the centre, which contemporaries stigmatised as medieval and morally and physical insalubrious, were in fact animated by an active and coherent society, with its own hierarchies and forms of social mobility. Several cultures and social practices co-existed on the urban stage. In the first half of the century, they circled around one another hesitantly in the popular theatres and dance-halls of the "boulevards du crime", torn between fear and attraction. Putative social and political developments seemed to come to fruition with the February Revolution in 1848, only to disappear tragically with the June massacres. Far from being the culmination of processes begun at the beginning of the century, the Haussmannien institutions and architectures appear rather as a baroque décor erected by the regime to conceal the irreducible rift created within French society. 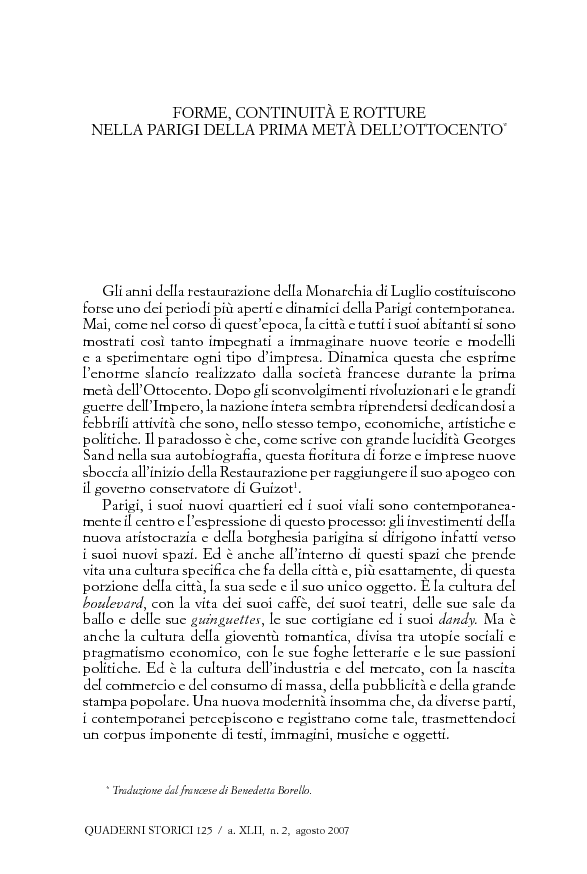