Identification in the large and small places in which one resides and in one's own community is of general importance, as it is in the context examined in the present study: the Lombard valleys at the end of the Middle Ages. The historical profile of such spaces, the rights that the men there enjoyed, the obligations that they were under were all delineated by a broad array of experiences. This paper focuses on the effects of certain judicial practices, particularly the evaluation of the specific condition of individuals in a court case, of their residences and of the purview of those who are supposed to judge them. The results suggest complex phenomena of localisation at different levels in the organisation of the territory, from an individual residence to the administrative districts of the state. To cite a few aspects: particular immunities surrounded the house; the struggle among the judicial magistracies competed with the recognition of the institutional role of the district; the exercise of policing functions and general liability involved the comune, which for that matter also possessed knowledge of the personal conditions on which any judgment depended. The comune itself appears as a synthesis of classes, families, and individuals, when it acts (for instance) to regulate means of notification, bring criminal accusations, and fight contraband. Ultimately, judicial competences put the jurisdictional design of the state in communication with territorial projects elaborated from below, generating interests common to both inhabitants and to princely magistrates who sustained otherwise fragile institutions such as the università di valle e di lago, sanctioning the inclusion of residents and the exclusion of foreigners in a manifestation of local rivalries. 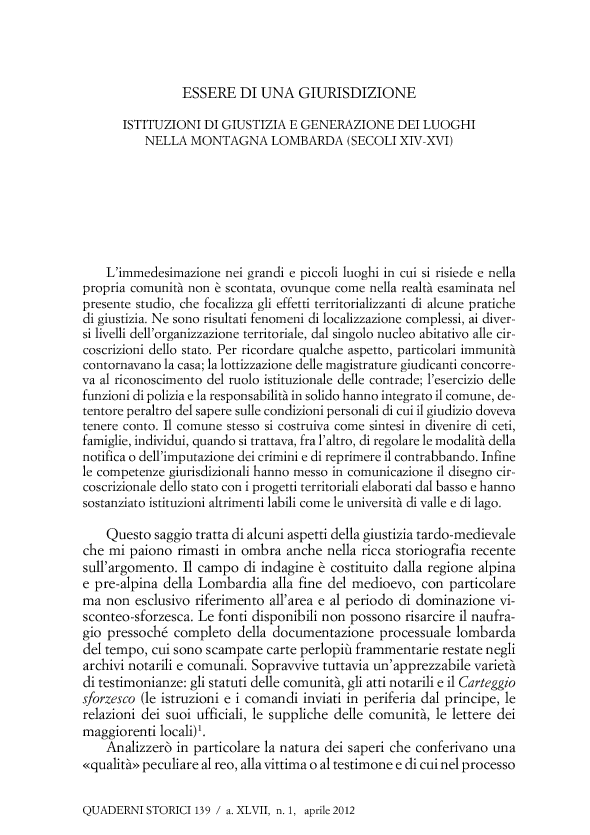