This article studies the inquisitiones per testes in the territorial conflicts in the Ancien Régime and their function as evidence in the definition of land possession. The case study, a dispute between the villages of Cappella and Vagli on the Alps Apuane, sheds light on the concept of fama - the «public voice» or the «common opinion» - about who possesses what. Witnesses were questioned about what was well-known, which was not nevertheless consensual, considering that the litigants often gave different accounts. The analysis shows that both «social» competences (good reputation, honourableness, social integration) and «practical» competences (experience of the disputed places, knowledge of the rights related to such places) contributed to defining the authority of witnesses and the credibility of their sayings. The examination of testimonies suggests that, in order to be able to speak about rights of tenure or ownership, witnesses represented themselves as taking part in the dynamics of exploitation of the disputed resources. Witnesses were credible because of their involvement in the social processes as well as in the formation and diffusion of fama rather than because they were external, objective or neutral observers. Contrary to approaches inspired by deconstructionism, which confine themselves to stressing the constructed nature of testimonies and to attributing to the witness the unique ability to repeat a story which is established somewhere else, I argue that testimonies were taken seriously by the judges. Public authorities examined the stories told by witnesses and relied pragmatically on the fact that close questioning would provide useful indications for reaching a final compromise. 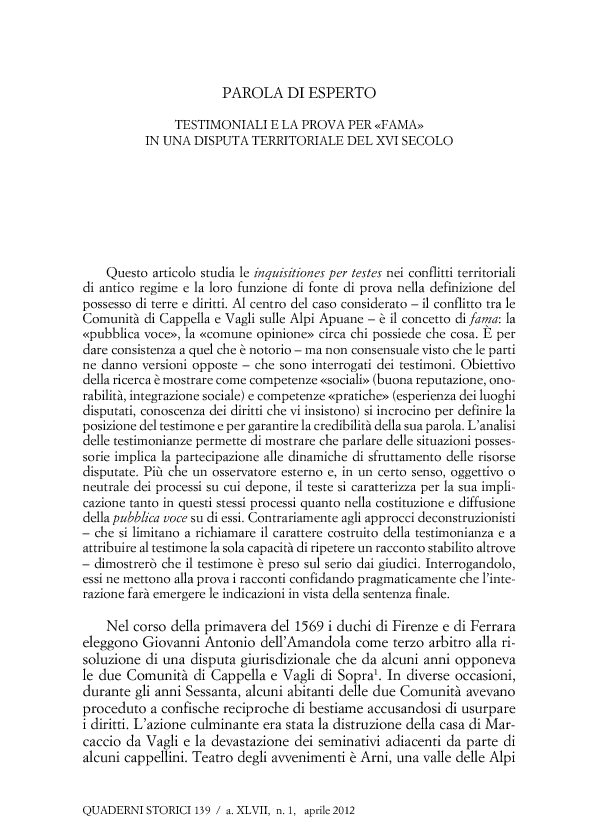