«Public violence» (öffentliche Gewaltthätigkeit) was one of the most common, and feared, crimes in the Italian countryside during the period of Austrian rule. First this article briefly examines the legal definition of this crime in order to comprehend, among other things, the genesis of criminal stereotypes linked to those guilty of public violence. Then it examines the relationship between the institutions and social forces used for its repression. The analysis of the court documentation shows on the one hand the aim of political and psychological stability that the authorities pursued by flexi- bly deploying this figure of crime: above all, through such a means the customs of the rural world (scuffles between groups of youth, brawls, country thefts) came to be constructed within the categories of the Code. On the other hand, this attention to rural contexts expressed the effort to pacify the countryside that represented for the Austrian empire - and for all the other agrarian empires of Europe - a crucial problem of political legitimacy. After the Revolution of 1848, the problem of rural delinquency and the crisis of community institutions made public violence an even more pressing problem in the Italian countryside of the Empire. The pressures coming from local landowners and the criticism that these continually offered against the Austrian judicial apparatus represented the other dimension of the social context in which the protagonists of the crimes of public violence acted. Processes of producing knowledge about the rural world, statistical investigations, definitions of the border between public and private spaces, and class struggle constituted the true social background - and the real stakes - in our cases. 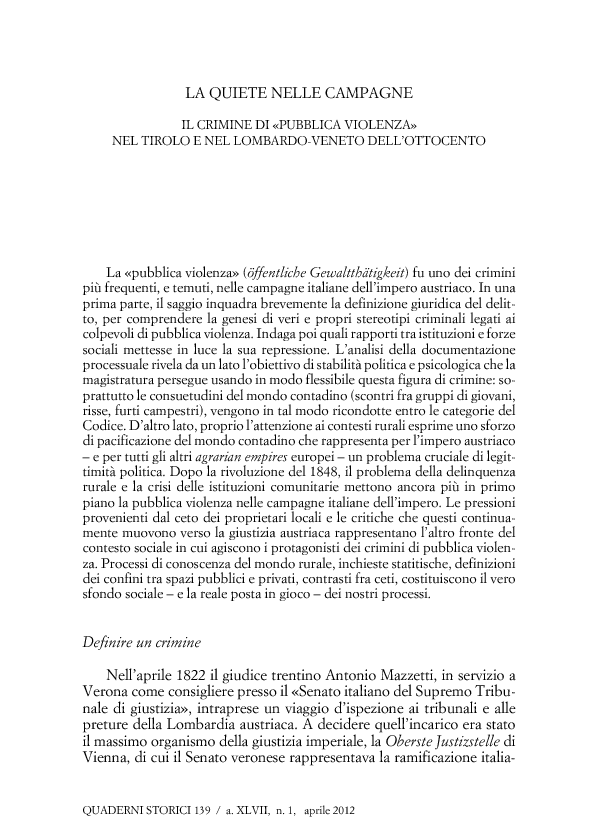