During the «disturbances of the League» (c. 1584-1596), the city of Marseilles offered vigorous resistance to Henry IV of France. Although seized by the king, the city remained agitated by factious fighting, riots and the fear of foreign conspiracies. Henry IV decided to entrust Guillaume Du Vair with the pacification of Marseille, first as president of the Justice Court (1596-1599), then as president of the Parliament of Provence (1599-1616). This paper illuminates some unknown aspects of this well-known magistrate in action. Impregnated with stoicism, he always preferred negotiation to repressive measures, and tried to reach a juridical compromise in Marseilles: in exchange for her obedience, the city would keep her privileges, including those gained during the rebellion phase. Besides, Du Vair combined moderate judicial reaction with pro-active counter-espionage activity to identify, arrest and convict the ex-ligueurs likely to still be in contact with the king of Spain. Last of all, his action also had a rhetorical aspect: his constant reconciliation discourses strategically cut across the aspirations of the local elite for civil liberties. Du Vair did his utmost to pacify the «free town», but the city remained so unreliable that Marseilles can be considered as the theater to watch the methods and the limits of the «Henritian restoration», far from absolutist standards. 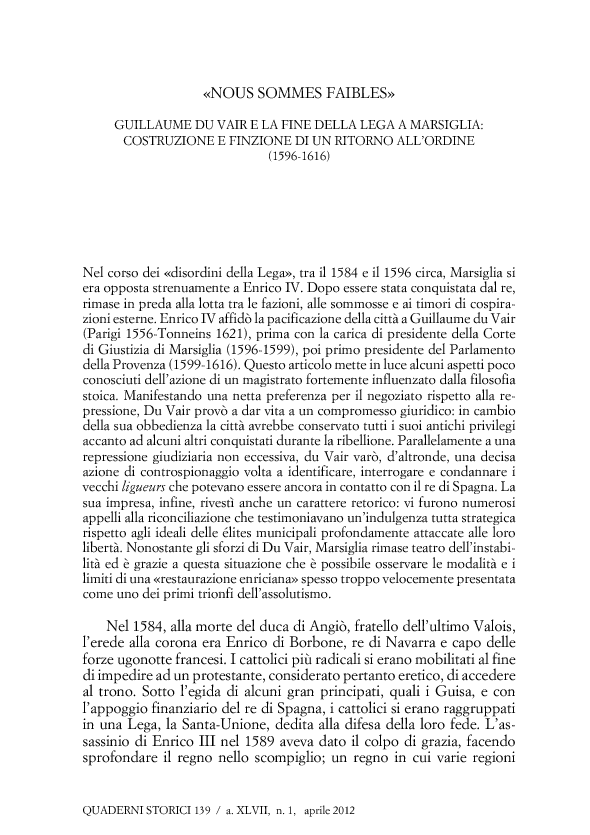