Within a horizon that took in both the West and the East Indies - the former just discovered and the latter extending to the edge of Asia -, the Catholic world found itself at the centre of a process of identification of China as a paradigmatic space of the «other», conceivable as «same», and hence potentially open to evangelization. The article explores the spatial logic that gave rise to a social and intellectual process of knowledge production in relation to China, examining the work that fostered such a change in Europe in the 1580s - the Historia... del gran reyno de la China. Published by the Augustinian monk Juan Gonzales de Mendoza in 1585, and quickly translated into various languages, the Historia is seen here as the expression of a communicative process in which the book is situated at the centre of the production of new knowledge about geography, nature, men and customs. The elaboration of such knowledge was underpinned by the material, social, political and symbolic resources of Rome, the capital of a Catholic Church wrestling with Spain and Portugal for control over the spiritual undertaking of reconstructing Christian universalism. Mendoza's undertaking places the missionaries firmly in the centre of the stage, in that they were gatherers of information and producers of new knowledge, engaged in the competition that pitted the orders they belonged to against each other and divided by different loyalties (also insofar as they were subjects of temporal sovereigns), which conditioned their own «making» of China and the coordinates within which they performed this operation. 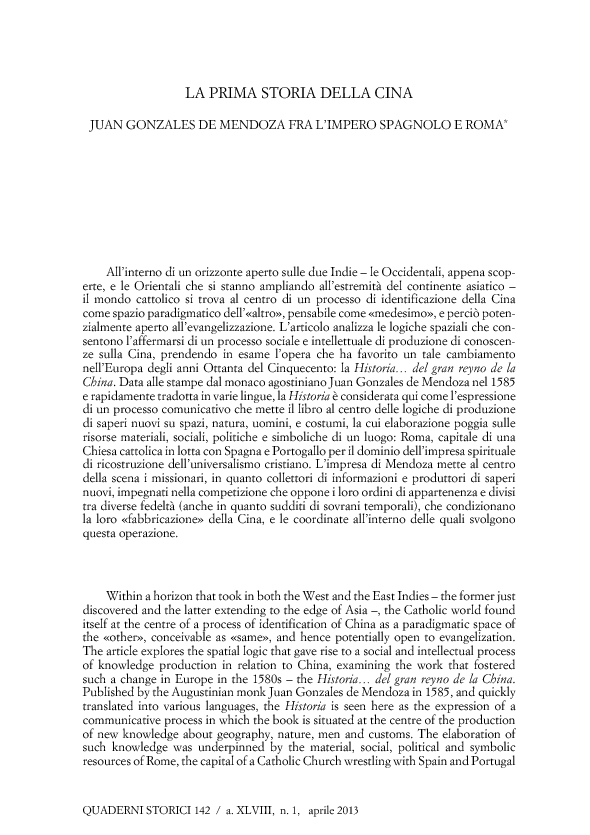