All studies devoted to the "Bohémiens" of Ancien Régime present a difficulty in the same definition of the subject of research; in addition, great is the temptation to look for the traces of their assignment of identity only in the analysis of normative legislative documents. In this case, the long established link of «compagnies de Bohémiens ou Egyptiens» with the French Kingdom between 1500 and 1600 still looks like a phenomenon difficult to classify; nor the consultation of published or iconographic sources is necessary helpful. Having taken the decision to suspend the judgment on the allocation of the identity marks, the article attempts to establish the captains «se disant Bohémien ou Egyptien» as social actors in their own right. The choices to declare themselves as "égyptiens" are analysed in their particular contexts, through the contractual documents negotiated for the company with the king, the lords, the community, and through the process of genealogical anchoring. Over time, the captains of "Bohémiens" register a double legitimation, both at family and military level, by confirming their authority over their compagnie, gens et famille». Finally, by including this analysis in the double movement of the new military historiography and of social history one can understand the working of the tension between the pursuit of social stabilization and military practices that appear as a common denominator to military companies of égyptiennes, gypsies, zingare, zigeuner in the Western States of Modern Europe. 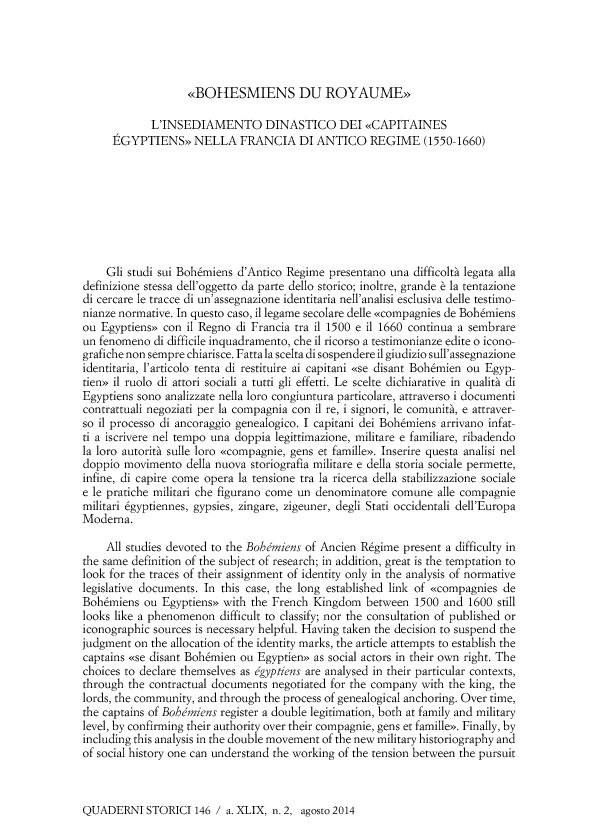