This article reconstructs the historical vicissitudes of the gypsy family De Olivas (classified as "zingana/gitana/griega"), in Sardinia, starting with the indications offered by the documentation conserved in the Diocesan Historical Archive in Cagliari. The study of the "Quinque Libri" allows one to approach the events of ordinary life of these groups, therefore escaping from an exclusively marginalist perspective. The De Olivas are one of the longest settled families on the island, with the most traceable continuity (second half of the 16th century-beginning of the 18th), with the broadest territorial distribution (27 parishes, in five different dioceses), and in whose documents are found the first attestations of "naturaleza". The data coming from the "Quinque libri" show the broadness of their range of contacts and the capacity to construct socially significant relationships(matrimonial alliances both with gypsy families of the first immigration wave with Italian origins - zinganos/griegos - and gypsy families with Spanish origins - gitanos -, as well as with families whose last names relate to Sardinia). Thanks especially to the examination of the ties of godparenthood with individuals of various social ranks, this paper also sheds light on the complex gamma of relations that connected gypsies with other actors who participated in the Sardinian social scene, and demonstrates more in general the dynamics relating to the other groups of zinganos and gitanos stationed on the island, showing the elements of continuity and discontinuity and enlarging the visual field to the Mediterranean context as a whole. 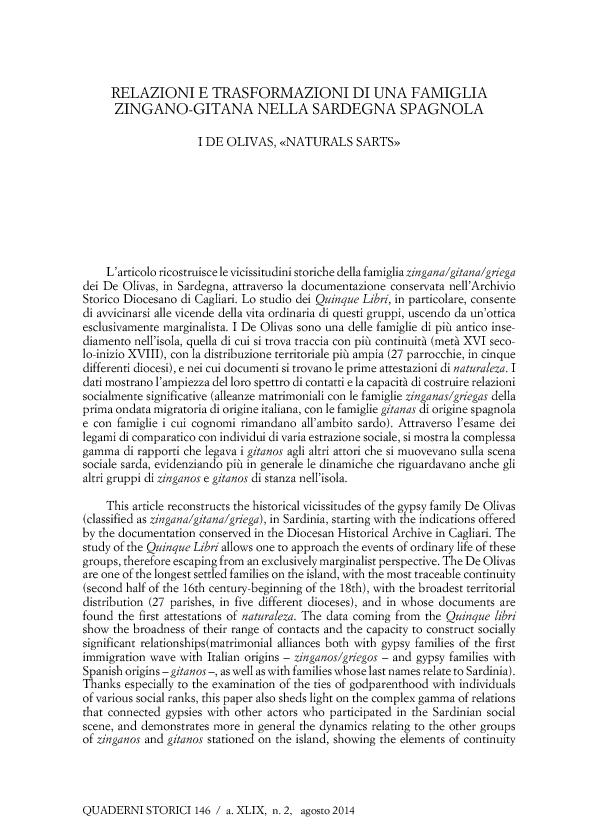