A substantial documentation shows the presence between the late sixteenth and the middle of the next century of Gypsies in many different areas of Kingdom of Naples. It was what we might call a «dynamic settlement» especially on the coast of Abruzzo, Puglia and Calabria, in areas where they established their own resources in the economy of transit thanks to production practices able to live with, if not to promote, the mobility of groups and individuals. In these areas of transit some communities, without permanent residence, managed to evade deportation policies implemented by the government through the negotiation with the local authorities of a special pass. The essay shows the veracity of the «licenses» of captain of gypsies, of which so far had trace only in the literary and iconographic tradition, describes the rules by which they were issued by the Collateral Council, the highest body of judicial in the Kingdom of Naples. In an area immediately close to the city of Naples, it describes the situation of Neapolitan Gypsies, segregated in areas which were a border line between the belonging to the «gypsian nation» and the aspiration to acquire the prerogatives of citizenship. The license essentially legitimized, in fact, membership of a legally recognized «mobile» community, not excluded by the activation of resources and, above all, not comparable to that of wretched or vagabonds. 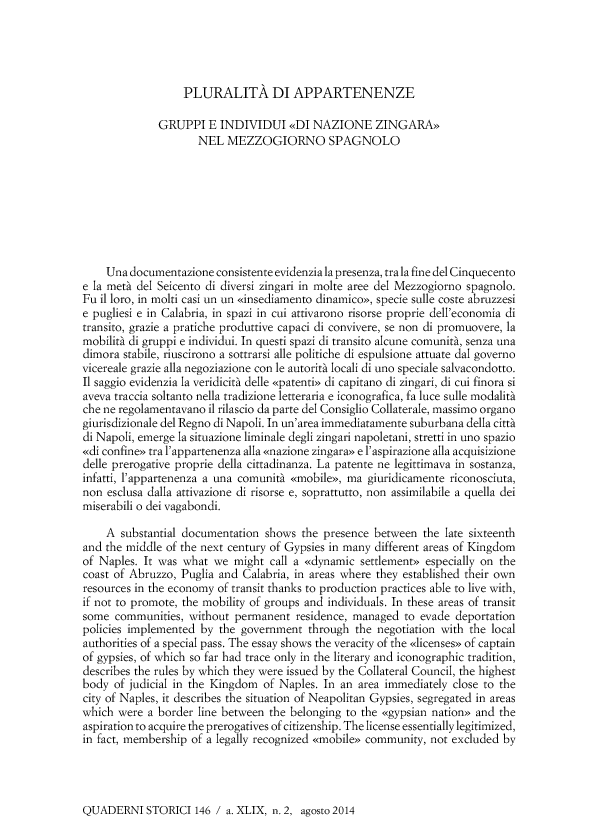