Recent scholarship has highlighted myriad conflicts attending the legitimacy of power and authority at different levels of society in the Duchy of Milan. Against this backdrop I would like to explore how different political cultures could coexist. Indeed, day-to-day life was not made up only by conflicts, and all the players - from the prince downwards - sooner or later were interested in finding a middle road. Given that the relationships between the lords of Milan and the social and territorial bodies of the dominion were generally set out on the grounds of pacts, I assume that in the mirror of these documents it is possible to trace the role of the chancery as a political mediator. Indeed not only played the chancellors a significant role in dealing with the prince's counterparts (like communities or lords of castles), but they had also the responsibility of drawing charters which formalized the agreements. My ultimate goal is to show how, through an accurate selection of words, which each side could interpret in the light of its own political culture, the chancery made the impossible become possible, and mutually incompatible principles and ideals could overlap, apparently without clashing. Hence some concluding remarks on political communication in the state-building process. 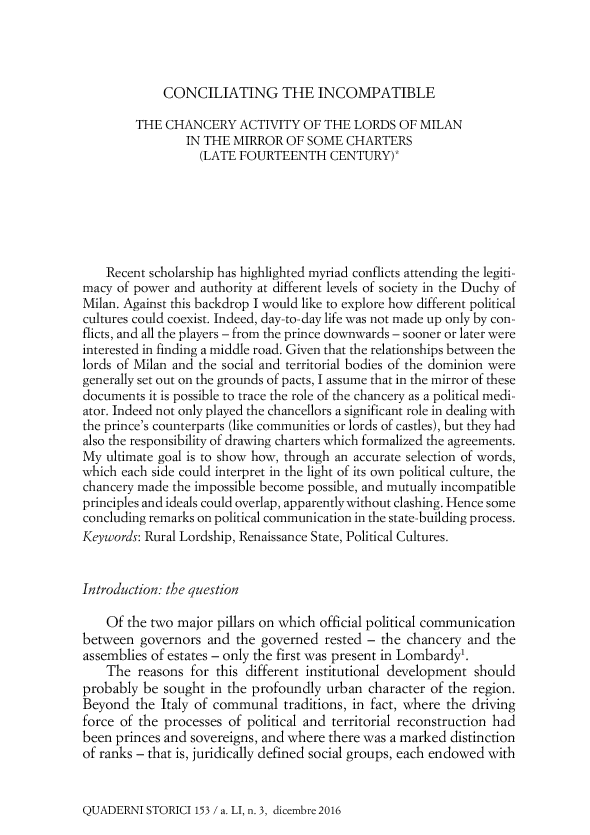