The aim of this essay is to discuss the role of chivalric culture at the end of the Middle Ages in Italian aristocratic identity, which scholars have recently revalued in the period of so-called courtly or urban civilization. The research focuses on an area that was slightly conditioned by court and city culture: the Alpine valleys of Lombardy. The status symbols analyzed are the housing styles and frescos inspired by history and literature. What emerges is surely the long-lived adhesion of the first rank of the aristocracy to military fantasy, exhibited in fortified houses and themes of hunting and warfare for their decoration. On the other hand, palaces and paintings are not static and mechanical manifestations of a fixed social eminence. Our approach is the social history of artistic works, in other words the microanalysis of the commission context, rather than a stylistic or a merely cultural interpretation. Many social actors (nobles, upstarts, communities, the states of Milan and Venice) were in competition for the power of using violence and of setting up structures of defense, like the fragmented jurisdiction over the Locarno castle demonstrates. This perspective allows us to reconstruct a field of aesthetic competition, rather than a mere aesthetic evolution, and to nuance some of its social implications. For example, when the state control of military structures grew and even middle-class men were enabled to inhabit a tower, the most powerful lords of the area (the Beccaria of Sondrio) chose to maintain their stately castle, but other families preferred to transform a fortified habitation into a sumptuous Renaissance villa, the new modish sign of distinction, or to live in a town building. 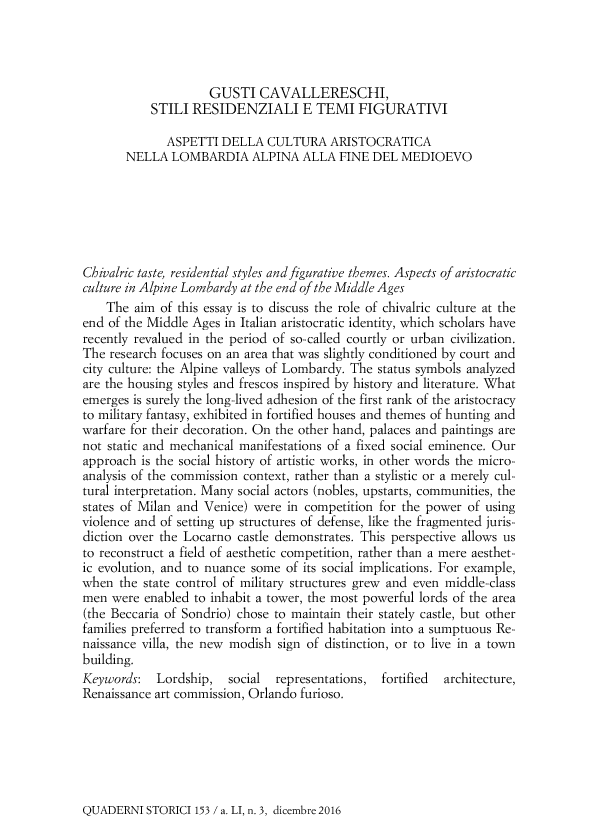