The outcome of the Franco-Prussian war and the unification of Germany irreversibly altered Europe's political equilibrium and with it the ideological predominance of French culture on the Continent. This was particularly true for the young economic science. The predominance of Anglo-French economic liberalism had had its culmination in 1860 with the Cobden Chevalier Treaty, sanctioning not only the commitment of Great Britain and France to free trade but also the proximity of their traditions in economic thought. The emergence, though, in the subsequent decade of new national bodies in Italy and Germany brought to the forefront the necessity to justify institutional changes and profound reforms in law and polities, a feat done summoning the historical evolution of societies more than endorsing individual freedom. Eisenach was the German answer, Milan the Italian one. Both congresses, held in 1872 and 1875 respectively, harshly condemned the inhuman working conditions, for women and children, entailed in the industrialization process and consequently invoked the intervention of the State in the name of moral principles. Contingency was so the excuse of pervading policies that could be adapted to different situations in space and time. Liberalists could not accept such turn in economic science. Across borders, alarmed reviews of the two Congresses were printed, translated and commented, journals were even founded with the intent to refute or diffuse the new theories. The ensuing "Methodenstreit" became a powerful means to diffuse economic thinking in the whole of Europe, stimulating international reviewing of economic books and articles and the translation of economic texts. 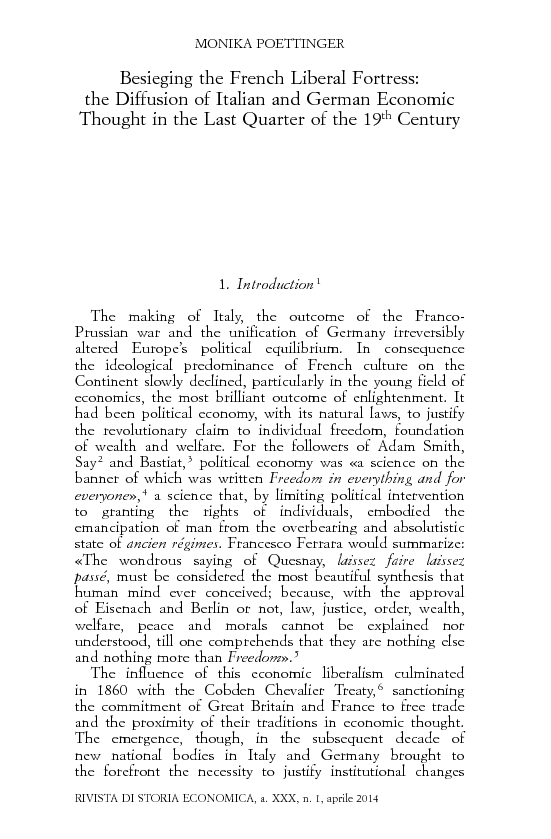