The Italian brewing industry came to age at the end of the nineteenth century. Previously, the production was on a small scale, for small local markets. Demand, on its side, was sizeable only during summer. At the end of the XIX century, several scientific and technical innovations made possible the production of low-fermented beers, stimulating a process of concentration into large plants and a rationalization in the industry. Until the end of World War I the concentration rate grew steadily. A small number of big producers dominated the market. Their power was strenghtened by the huge investments necessary in production and distribution; but alongside them, some small producers persisted in niche markets on a regional basis. After the war, beer per capita consumption more than doubled; this trend was accompanied by a further concentration and rationalization of the industry both on the production and on the distribution side. Major Italian brewing groups were built up during this period thanks to mergers and acquisitions aiming at concentrating the distribution network which was considered the producer's main asset. A deep crisis begun in 1926; per capita consumption fell to pre-war levels and all the breweries suffered considerable losses. The main producers resorted to collusive practices. The national market was divided into regional areas, in each of which a single firm enjoyed a dominant position. This cartelization of the market obviously damaged the small producers, causing the concentration rate to increase further. During the 1950s, the Italian brewing industry maintained the structure built up during the inter-war period. Demand was still very elastic to price and income, and heavily dependent on season and climate. 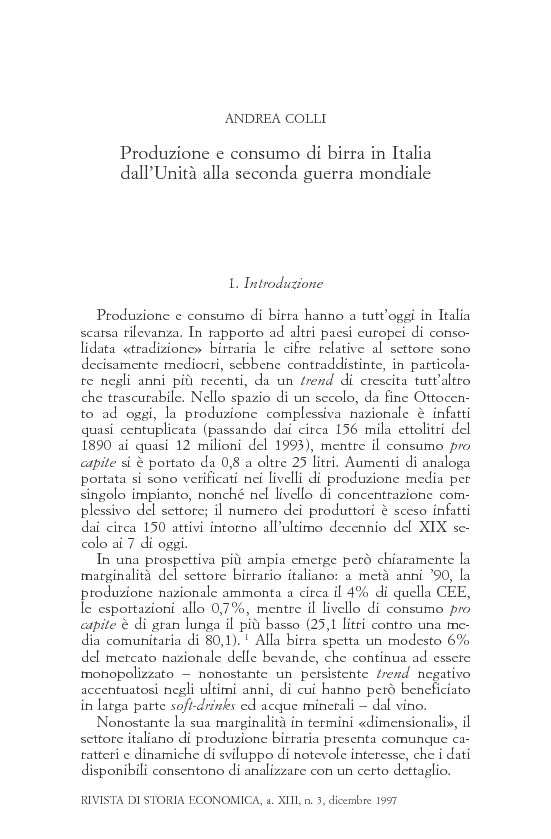