In On the Plurality of Worlds David Lewis claims that the actual world is one of a huge plurality of concrete worlds, inhabited by equally concrete individuals, and that these worlds are causally and spatiotemporally isolated. Our world is the actual world, the other worlds are, from our perspective, possible worlds, and the belief that things might be otherwise than they are comes from an existential quantification over these concrete possible worlds. In Différence et repetition Gilles Deleuze claims that «the virtual is fully real in so far as it is virtual». If we replace the word ‘virtual’ with ‘possible’, Deleuze’s claim seems to perfectly match that of Lewis: the ‘virtual/possible’ is real without being actual and it possesses a fundamental explanatory power. Furthermore, both philosophers claim that a plurality of worlds exists and that we must distinguish ‘accessibility’ from genuine ‘possibility’. However, right in the gap between virtual and possible – gap that tends too often to vanish – we can trace the difference between Lewis’s philosophy and that of Deleuze, between a metaphysics of possibility and a metaphysics of potentiality. In order to put in constructive conversation two philosophers that belong to traditions far removed from each other, we need to distinguish the reality of possible from the reality of virtual; this requires to sketch an outline of Deleuze’s theory of possibility and possible worlds, theory in which the doctrine of the possible is wholly governed by the doctrine of the virtual. While underlining similarities and differences, we suggest an alternative way to make sense of Lewis’s claim about the existence of a concrete plurality of worlds without relying on the problematic «principle of recombination», and we point out how a philosophy of virtuality could offer a useful contribution to the ongoing debate on dispositions. Besides similarities, the major interest for comparing the reality of the possible and the reality of virtual stems from the key role played by Lewis’s and Deleuze’s ideas in the Italian and international philosophical debate. 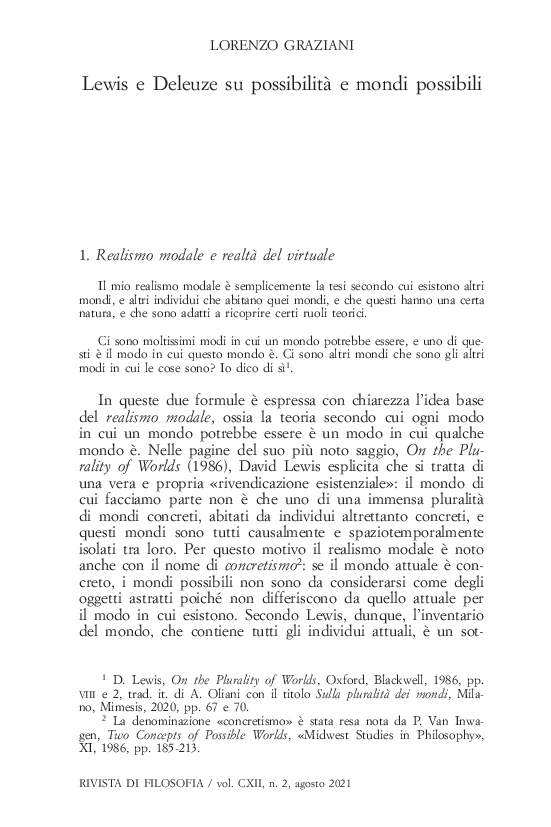