The paper deals with the development of philosophy research and scholarship at the State University of Milan since 1930. At the beginning of the essay the author places Piero Martinetti's religious and transcendent idealism, which had also the significance of a moral opposition to fascism. To the school of Martinetti belongs among others Antonio Banfi, who was the most influential philosopher in Milan between the two World Wars. Banfi's critical rationalism originated a new trend in aesthetics, philosophy of culture and history of philosophy, and was widely spread thanks to the journal «Studi filosofici» (1940-1949). Banfi's thought was critically received and discussed by thinkers such as Remo Cantoni, Giulio Preti and Enzo Paci, who nevertheless increasingly took distance from their master. Existentialism, logical empiricism and philosophical anthropology became the items preferred by Banfi's most important pupils, so that after 1945 the «school of Milan» came to an end. During the fifties a different philosophical climate arose, characterized by both new standards in the field of history of philosophy (Mario Dal Pra), and the debate promoted by the so-called «neoilluminismo» about human knowledge, reason, and the necessity of renewing the Italian philosophical tradition. But it was particularly in the sixties that the philosophy in Milan changed quite radically its face, with the return to Husserl advocated by Paci, the reappraisal of dialectical materialism fostered by Ludovico Geymonat, and the diffusion of structuralism, western Marxism and human sciences. According to the author, however, the philosophical legacy of that period comes out as being no more significant in the last two decades, which are rather characterized by the exhaustion of a specifically «milanese» way of philosophizing. 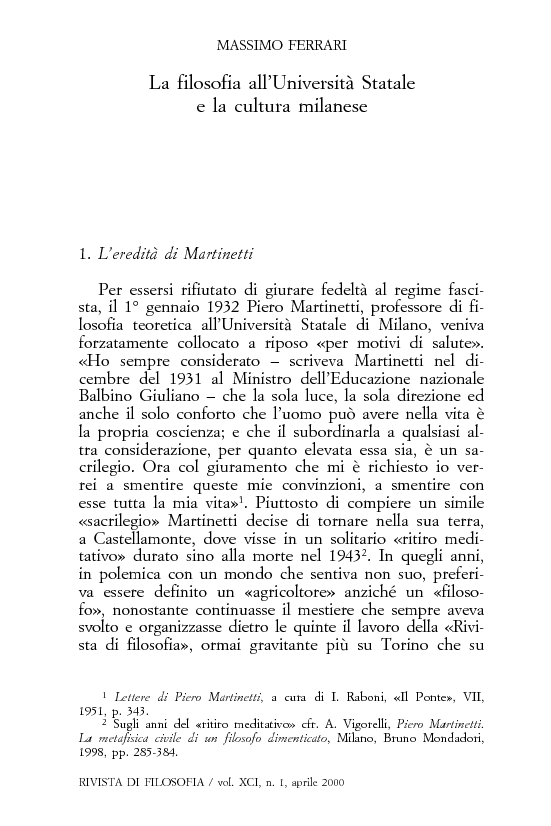