In this paper, I defend a non-realistic view of gender categories vis--vis Sally Haslanger's recent attempt to argue in favor of a "thin" metaphysical realism of gender categories. The paper is divided in two parts. In the first, I present Haslanger's view, as characterized by the two following theses: (i) there is an objective basis for gender distinction; and (ii) this basis is not the product of discursive effect. In my analysis, particular attention is given to her critique of anti-objectivism in relation to sexual categories and to the so-called "ubiquity of mediation thesis", i.e., that all of our access to reality is mediated by language and knowledge. In the second part, I show why Haslanger's approach is inadequate, by showing that sexed entities are neither natural kinds (i.e. common essences which a group may share), nor "objective types" (i.e. unities without an underlying essence). A conflict - I will suggest - emerges between her realistic view and her social constructionist accounts of gender. These defects, I argue, may be resolved by thinking of gender as referring to tropes, that is particularized property manifestation can only exist in one location at one time. Womanness, for example, is neither the special way a woman participates in a universal, nor a peculiar quality of a woman, but simply something that a particular person - and that person alone - has. As result, I conclude, one's gender may not be entirely stable and there is no feature of identity or unity itself that all women share. 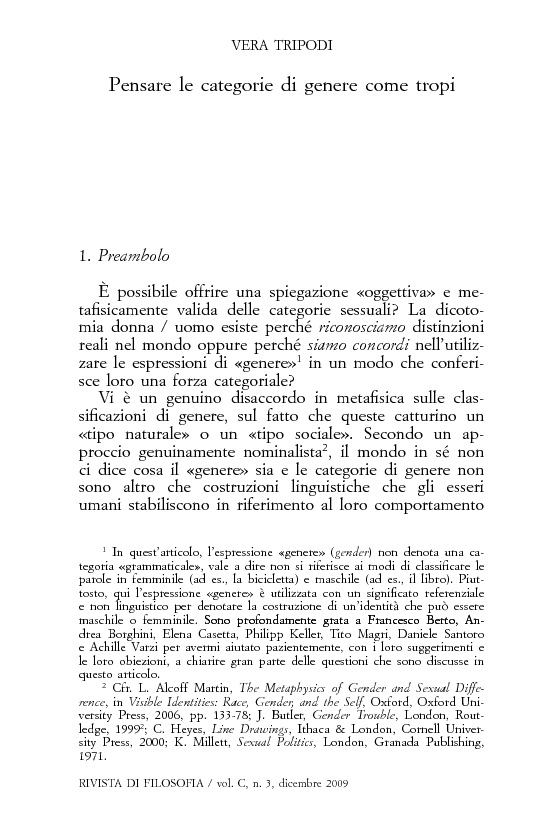