The essay gives an account of the relationship between Italian and German philosophy in the postwar period. According to the author, the "images" of German philosophical thought elaborated in Italy during this long time are more connected to Martin Heidegger's and Hans-Georg Gadamer's conception of philosophy as critique of modern scientific way of thinking than to other philosophical streams, whose influence on the German speaking world was brutally interrupted by the rise of Nazism in 1933. Although many aspects of the German philosophical tradition beyond Existentialism, Hermeneutics and Western Marxism such as neo-Kantianism, Historicism, Phenomenology or Philosophical Anthropology are quite well known, in Italy the current image of German philosophy is still characterized, broadly speaking, by the critique of Enlightenment and modernity in the sense of Heidegger's tradition as well as by suggestions related to the "negative thought" starting with Nietzsche. Nevertheless, the essay shows how it is possible to formulate another image of German philosophy: history of philosophy and philosophical insights beyond the great division into the two fields of analytic and continental tradition may contribute to rediscover eminent philosophers such as Ernst Cassirer and Rudolf Carnap, which had the great merit for having contrasted Heidegger's conception of philosophy and politics by elaborating, on the one hand, a new vision of Enlightenment in the spirit of liberal republicanism and, on the other hand, an account of scientific reason aiming at a project of rational modernisation and radical social reforms. Italian culture can therefore reconsider German philosophy and its tradition beyond the image of "Holzwege" largely endorsed by our "maitres à penser". 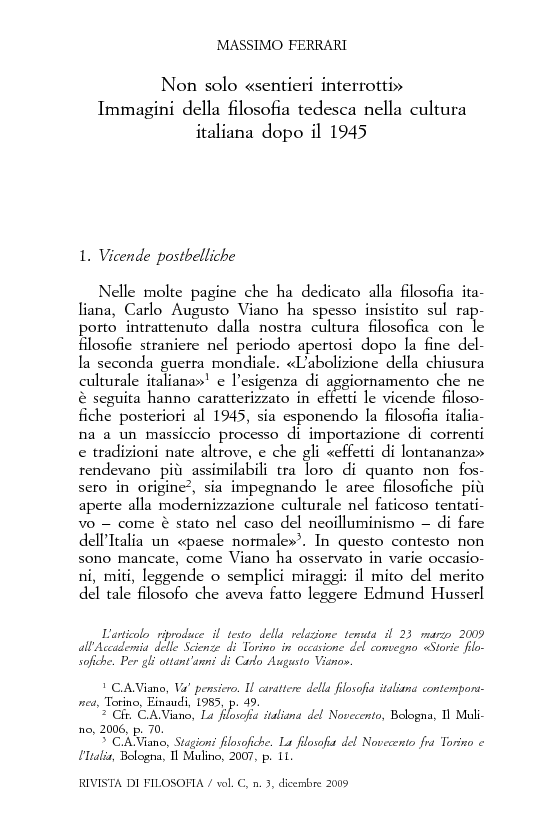